Earlier this month when describing an accident insurance policy bearing a scarce usage of R161, the 1/2-cent Orange Documentary Battleship issue, I suggested conducting a census of on-document usages of R161 via this blog. Several additional usages now have been reported bringing the total number of known usages to seven. In due course we'll show them all, and any more that are reported. 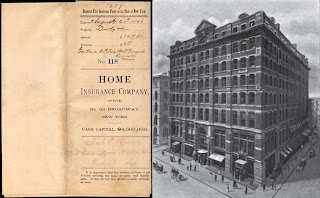 At left: 1898 Policy for dwelling in Frederick City, Maryland
At right: Headquarters of the Home Insurance Company
119 Broadway, New York, New York circa 1898 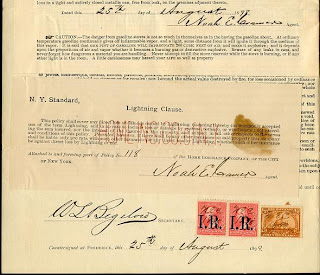 bottom half of the policy interior with stamps
Despite the errant year date on the front of the policy, it was written to provide coverage for one year, from noon August 25, 1898 to noon August 25, 1899. It insured damage by fire, not to exceed $1670. $1000 was for a two and one-half story shingle roof dwelling at 82 E. Patrick St., Frederick City, Maryland. Additional coverages included a frame shoemaker shop, a grain warehouse, a stable, a carriage house, and another warehouse off-site.

It included a gasoline permit for a stove, no artifical light permitted in the room when being filled, among other standard provisions of the day. A tipped-in Lightning Clause covered damage caused by lightning, but not tornado, cyclone, or windstorm damage.

Marine, inland, and fire insurance policies, like accident policies, were taxed at 1/2-cent per dollar of premium paid or fraction thereof. The tax for the $8.89 premium thus was 4 1/2-cents, properly paid by a pair of 2-cent I.R. overprint issues and a single R161, 1/2 cent orange documentary. It appears the local agent, Noah E. Cramer may have absorbed the tax as his initials appear on the stamps.

We'll be showing more interesting R161 material in the days to come. If you know of other on-document usages please email us at 1898revenues@gmail.com.

The Home Insurance Company was founded in 1853 and had a long run, but it has been in liquidation since June 13, 2004.