Editor's note:  Today begins a series of contributions from Bob Hohertz on 1898 stamped paper.  By all appearances, this is a short subject.  The Scott catalog's 1898 stamped paper listings run for no more than a quarter of a column, and consist of five major numbers, RN-X1, X4, X5, X6, and X7, with no X2 or X3.  More on those missing numbers later.  None of the listed varieties are frightfully expensive, though RN-X1 as a complete piece is quite scarce.


For those of you unfamiliar with revenue stamped paper, the concept is reasonably simple.  Stamps (if the image could be called that) were printed directly on the functional documents.  For example, checks would be printed with the Federal tax stamp directly on them rather than requiring that a stamp be applied when the check was written.  In certain cases stamps were embossed, like those during the pre-revolutionary war period.  The stamped paper of the 1898 period includes only printed ink stamps.


Bob has sent me some narrative material and beautiful scans from his collection which he uses to demonstrate the single design used for the 1898 stamped paper:

I’m happy and honored to be asked to contribute some notes to this site on the imprinted revenues used during the Spanish American War Tax Period. I’ll try to present material in the order of the Scott Specialized Catalog, except where I think it is incomplete or a bit misleading.

The imprint design was taken from the two that the Bureau of Engraving and Printing furnished to Morey & Sherwood and A. Trochsler & Company respectively, in 1874. 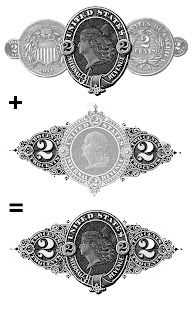 Fig1.
I did the combining in the illustration above using Photoshop, but by 1878 a similar design was in use on tobacco wrappers, and remained so until mid 1898. At that time the Bureau changed the wording in the circles around the numerals, changed the numerals themselves, and used the design for documentary imprints. 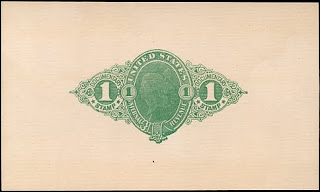 Fig 2. A proof of the one-cent design.
Since most of the 1898 documentary taxes above two cents were variable depending on the amount of the transaction, only one cent and two cent designs were produced.
Posted by John Langlois at 7:00 AM