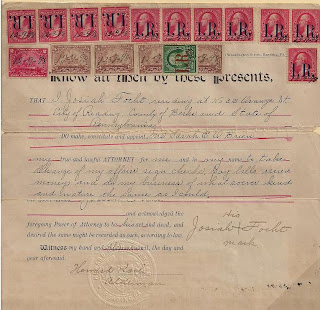 closeup view of correction of the improper use
of four 1/4-cent proprietary stamps with a 1-cent R154
provisional I.R. overprint cancelled in a different hand

A power of attorney, whether for a specific transaction like a stock sale, or universal, as is the one pictured above, was taxed 25 cents according to the War Revenue Law.

This one is particularly interesting because of the number and variety of stamps used on it. Usually one finds a single R169, 25-cent battleship stamp affixed. Here, eleven 2-cent provisional R155 I.R. overprint issues, and one regular R164 2-cent battleship along with four 1/4-cent RB21 proprietary issues paid the 25 cent tax.

One can almost see the parties scrounging among themselves for the stamps. They came up with 25 cents, but the use of the four 1/4-cent proprietary was improper. The War Revenue Law specifically required that only documentary stamps be used to pay documentary taxes and only proprietary stamps be used for proprietary taxes. Clearly the Treasury Department wanted to track the specific amount of revenue generated by each of those two tax categories.

A single 1-cent R154 I.R. provisional overprint stamp was subsequently added over the strip of proprietary issues to correct the error. It too is dated 12/9/1898, but the handwriting is different. So a total of 26 cents ultimately was affixed to this document. Use of proprietary issues on a document is uncommon, and a correction even more so. Generally their use either went unnoticed or was tolerated.