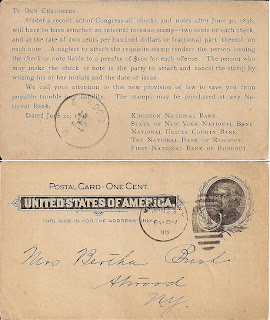 notice regarding the upcoming tax on checks and promissory notes
mailed to customers by Kingston, New York area banks
postmarked June 23, 1898
Beginning July 1, 1898 bank checks, drafts, or any orders for the payment of any sum of money, whether drawn upon or issued by any bank, trust company, or any person or persons, companies, or corporations at sight or upon demand were taxed two cents. As there had not been a tax on checks since the early 1880s, some banks sent out notices, like the one above, alerting customers of the new tax. As discussed in a prior blog about a cashier's check there were problems with the distribution of the tax stamps in some areas of the country.

The new tax stamps, however, did reach Fort Smith, Arkansas in a timely manner as evidenced by the July 1, 1898 Merchants Bank check pictured below. Note that both the check and the initialed stamp affixed to it are dated July 1. As shown by the double-ring Merchants Bank PAID cancel in the center of the check it also was processed on July 1, 1898.

As we'll explain in a future blog the most important element confirming that this is a first day of taxation check is the bank's dated PAID cancel, and not the date written on the check or the stamp.

The documentary tax on bank checks, and many other legal documents ended June 30, 1901. Taxes on some other documents including shipping receipts and bills of lading continued for another year until June 30, 1902.

Last day usages of the bank check tax are scarce, especially so from a business, as June 30, 1901 was a Sunday. Likely this check was for a bill due at the end of the month, or was an end of month paycheck prepared prior to, but dated, June 30 so as to prevent it from being cashed beforehand. 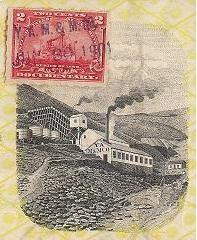 Like many California gold mines, the Yellow Aster in the Randsburg Mining district had a colorful history. It eventually would produce more than $12,000,000 in gold.