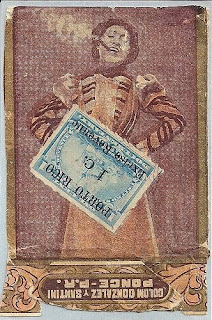 Rather than impose the existing US Federal War Revenue Law taxes then in effect, some of which would have been inappropriate or unfamiliar to the local inhabitants, the legislative assembly of Porto Rico instead enacted a broad array of excise taxes patterned after those of the prior Spanish colonial regime. These taxes took effect January 31, 1901 and the overprinted US stamps were used to pay them until other stamps could be printed.

The Act levied taxes on distilled spirits, beers and wine, cigars, cigarettes, manufactured tobacco, playing cards, proprietary medicines, perfumery, cosmetics and toilet articles, oleomargarine, arms and ammunition, and matches. Specifically, as illustated by the package front above, cigarettes were taxed at the rate of $1.00 per 1,000(1c per pack of 10).

Reportedly, only 90,054 of the 1c stamps were used. 200 were marked "Specimen". Another 200 unused copies were retained for souvenir purposes. The remaining 909,546 were burned.