Cancel for August 2: A. L. Howe for the Arkansas Construction Company 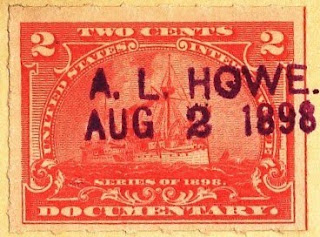 Backstamps for:
Kansas City Clearinghouse
National Bank of Commerce
National Bank of the Republic
Chicago
Central National Bank
Philadelphia
The Akansas Construction Company was formed in 1892 by a leading Kansas City businessman, Arthur Stillwell.  Stillwell built railroads and communities, and remains one of Kansas City's most important historical commercial figures.  Read more about him here.
Posted by John Langlois at 12:01 AM