In the May-June 2010 issue of The American Revenuer, published by the American Revenue Association there is an excellent article by ARA member Len McMaster entitled, Revenue use of postage stamps during the Spanish-American War. Below are pictured four examples of postage used to pay the bank check tax, but first some background from McMaster's article.

Using contemporary newspaper reports and correspondence McMaster documents the failure of the government to adequately distribute tax stamps by July 1, 1898, the date the new tax laws took effect. He further documents the confusion that situation created for the public and district tax collectors, and how some citizens and firms lacking the proper tax stamps resorted to using postage stamps, postage due stamps, and even devalued revenue stamps from the Civil War era in "good faith" attempts to comply with the current law.

I've never seen usages of postage due stamps, or previously devalued revenue stamps used to pay Spanish-American War taxes and McMaster doesn't show any, but the use of postage stamps, the subject of his article, was widespread. Because of the problems with distributing the appropriate tax stamps the use of postage, at least for a while, was generally accepted and tolerated.

The practice, however, raised serious concern for the Department of Internal Revenue because when postage was used the revenue accrued to the Post Office and not to the Treasury. To forestall further loss of revenue, IR Commissioner Scott, with the approval of Treasury Secretary A.D. Gage, issued rules relative to the payment of the taxes that specifically forbid the use of “ordinary postage stamps”. The rules, pictured below, were part of Commissioner Decision 19935 dated August 22, 1898. By then the tax stamps were well distributed and widely available to anyone needing them. 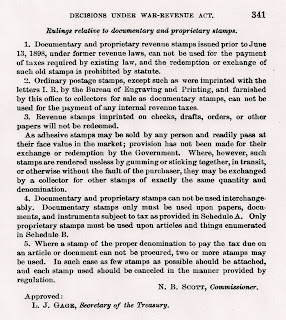 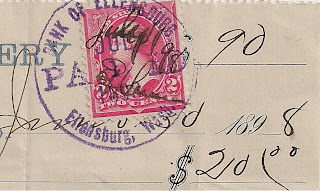 detail of check showing the stamp was not an official I.R. overprint

Apparently tax stamps were not available in Ellensburg, Washington on July 1, 1898 and the Bank of Ellensburg choose to accept without question the use of a 2-cent Bureau Issue postage stamp in payment of the war tax. 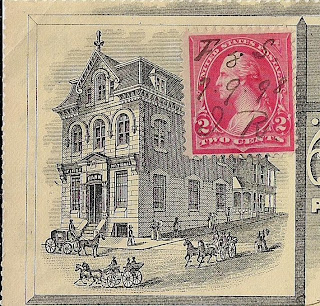 with manuscript I. R. endorsement

Postage stamps manually endorsed I.R. by customers attempting to pay the internal revenue tax did not qualify under the Internal Revenue rules as the funds expended for such stamps still accrued to the Post Office and not the Treasury Department. Only postage stamps officially imprinted I.R. by the Bureau of Engraving and Printing and distributed by the Internal Revenue qualified as the funds used to purchase those stamps did accrue to the Treasury Department.

detail of Ross & Williams' Bank check
showing abbreviated signature cancel of Katharine Swan and 9/8/98 date
By September 9, 1898 revenue stamps were well distributed and as this use was after Commissioner Scott's published decision expressly forbiding the use of postage stamp, the bank should not have accepted them. Clearly though, the practice continued to be tolerated in many locales. 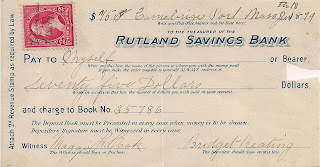 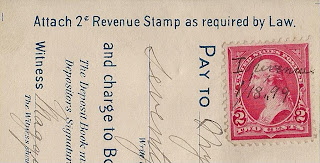 detail of Rutland Saving Bank check showing
"Attach 2c Revenue Stamp as required by Law" endorsement
and a postage stamp with a manual "I. Revenue" endorsement

I find the use of a ordinary postage stamp on the Rutland Saving bank check particularly amusing in view of the bank's printed "Attach 2c Revenue Stamp as required by Law" endorsement. Clearly the bank's officials knew the law required appropriate revenue stamps, and likely the clerk who processed this check did too, but ignored the infraction.
Tomarrow we'll examine some checks where the clerks processing them were less tolerant and required proper revenue stamps be affixed in addition to the illegally used postal issues.