Revenue collector Tim Kohler from State College, PA, sends in this spectacular item from his collection and adds the background and explanatory notes below: 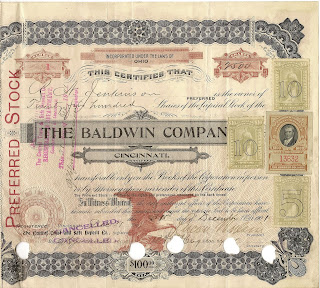 The Baldwin Company was started in the mid 1800s by Dwight Hamilton Baldwin. Dwight’s first enterprise was as a teacher of piano, organ, and violin in Cincinnati, Ohio. In 1862, Baldwin started a retail piano/organ dealership. In 1873, his clerk, Lucien Wulsin becomes a partner in the D.H. Baldwin & Company. In 1891, Baldwin offers for sale its first piano. In 1901, the Baldwin Company is established with Lucien Wulsin as its first president. Under his leadership, the Baldwin Company became the largest piano dealer in the Midwestern United States. 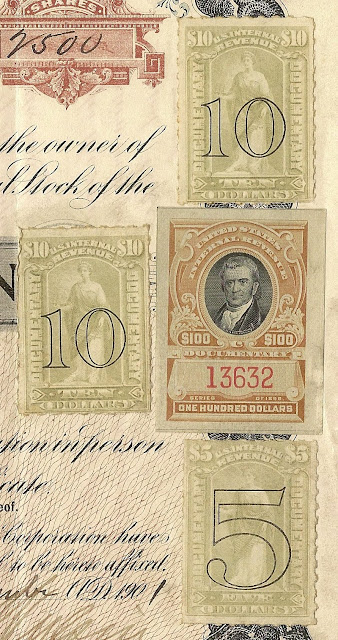 The stock Certificate is Baldwin Company Preferred Stock #1 for 2500 shares ($100/share) issued to R. Jenkinson issued 31 December 1901. Signed by Baldwin President, Lucien Wulsin.  The war tax on the initial sale of original issue stock certificates was five cents per each hundred dollars in face value or fraction thereof. The tax on this $250,000 certificate thus was $125, correctly paid by a single $100 John Marshall stamp from the 1899 Portrait issues, R179, plus two R188 $10 and one R187 $5 stamps from the 1900 surcharged Commerce issues.