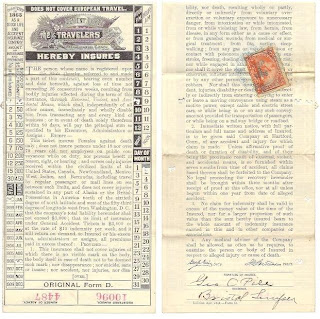 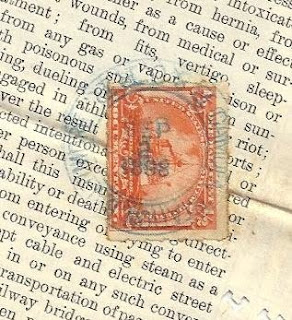 I saved what I consider the best of Bob Patetta's three on-document usages of R161, the 1/2-cent orange battleship documentary, to show last. Bob's Providence Rhode Island check with a combo usage of R161, R162, and R163 to pay the 2-cent bank check tax is stunning. But most fiscal history collectors, I think, prefer usages that are relevant to the purpose for which a stamp was issued.

The 1/2-cent value was created because most documentary insurance taxes, except life insurance, were calculated at 1/2 cent per dollar of premium paid or fraction thereof. And this one-day-travel accident policy for a journey on the B. & O. Railroad with a single one-half cent stamp demonstates that tax rate in the purest way. The premium for the accident policy was just twenty-five cents so only a single 1/2-cent stamp was needed. I wonder how they made change? Actually, the insurance company likely absorbed the tax.

Any usage of the 1/2-cent orange is scarce because the orange version was replaced with a gray version very early in the production of the battleship stamps. The orange color was close to that of the 3/8-cent proprietary issue and to avoid possible confusion, the shade of the 1/2-cent documentary was thus changed to gray.

Only two singular usages of the 1/2 orange documentary have been recorded so far. The other, also used on a travel policy, is pictured near the bottom of Bob Mustacich's website homepage. If anyone has information about any other R161 on-document usages not listed in this census please so advise and, if possible, send scans to 1898revenues@gmail.com

I may be mistaken, but about ten years ago I'm sure someone, whose identity I also don't recall, showed me a check with a block-of-four of the 1/2-cent orange paying the check tax. If it does exist in reality and not just in my imagination, we'd like to add that usage to the census which now stands at seven known usages.

Known today as The Travelers Companies, Travelers traces its history back more than 150 years. Recognized today by its distinctive RED UMBRELLA corporate symbol, Travelers is credited with issuing the first automobile policy, the first commerical airline policy, and the first policy for space travel. Since June 9, 2009, Travelers has been part of the Dow Jones Industrial Average.