My prior blog about an ocean passage ticket brought these scans from J. W. Palmer of a ticket from the then fledgling Florida East Coast Steamship Company. 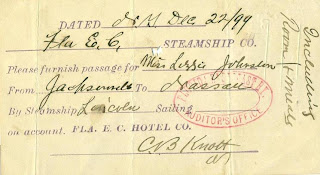 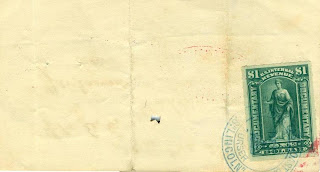 Reverse side of ticket
Tens of thousands of embarkation tickets, and maybe many more, likely were written for ocean passage from major Northern ports like Boston, Philadelphia, and New York during the Spanish American War taxation period, but there could not have been many written for travel via the Florida East Coast Steamship Company. The company, founded by Henry Flagler, who almost single-handedly spearheaded the development of Florida's East Coast during the 1880s and 1890s, didn't initiate service until 1896 and Florida was just beginning to become developed at that time.
Actually examples of ANY tax-stamped documents from Florida are hard to find let alone such an unusual usage as an ocean passage ticket. Thanks, J. W., for sharing yours! This one and the one I put up last week are the only two I've ever seen. Can anyone report another example of a taxed ocean passage ticket? 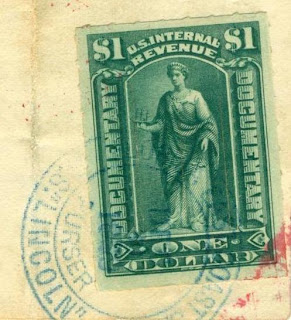 Double ring cancel for the
Florida East Coast Steamer Lincoln
DEC
30
1899
The front of the ticket is datelined N.(ew) Y.(ork) December 22, 1899. Its cost is not mentioned but the $1 stamp on the back indicates it was less than $30. The ticket was written "on account" of the Florida East Coast Hotel Company so presumably Miss Lizzie Johnston also was staying in one of Henry Flagler hotels and the ticket price was added to her room bill.
The stamp appears to be cancelled December 30, 1899, presumably the date of travel aboard the steamer Lincoln. Perhaps Miss Lizzie celebrated the beginning of 1900 in the Bahamas.
The red oval Florida East Coast Ry. auditor's cancel on the front is undated.
Posted by Frank Sente at 12:01 AM