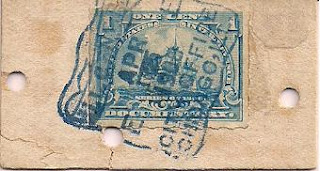 Reverse side of ticket
Purchased at the ICRR Chicago City Office
April 25, 1900

Most of the Spanish American War taxes were patterned after those enacted by the Union during the Civil War. The tax for seats in railroad parlor cars and sleeping berths was new and appears to have been added at the last moment as it does not appear in the normal schedule of documentary taxes contained in the act. As demonstarted by the 1-cent stamp affixed to the ticket above the rate was 1-cent per parlor car seat. 1-cent was also charged for each sleeping berth ticketed. 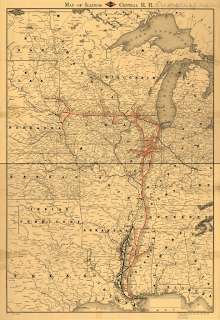 The Illinois Central Railroad (IC) has been called the Mainline of Mid-America because its major routes connected Chicago in the North with New Orleans and Birmingham in the South. Now owned and operated by the Canadian National Railroad the line still operates as the Illinois Central as it mostly has since its founding in 1851. As the parlor car ticket shows, the IC also, at one time, was a major passenger carrier between Chicago and St. Louis.
Posted by Frank Sente at 9:25 PM