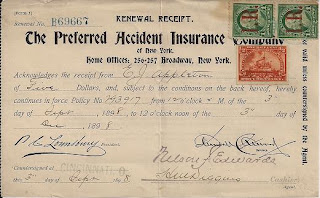 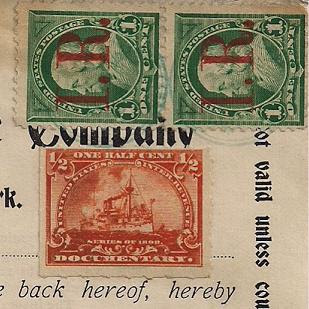 Accident, fidelity, and guarantee insurance policies, including renewal policies, were taxed at the rate of 1/2-cent per dollar of premium paid or fraction thereof. The 2 1/2-cent tax on the $5 premium for the renewal of The Preferred Accident Insurance Company of New York personal accident policy shown above was properly paid by two 1-cent provisional I.R. overprints and a single R161, 1/2-cent orange documentary all tied by an indistinguishable light blue, double-ring hand stamp cancel.

Because its color closely resembled that of the 3/8-cent proprietary issue, the Bureau of Engraving and Printing discontinued printings of the 1/2-cent orange after just two days and changed its color to gray. The exact number printed and distributed is unknown.

Most of the copies available are badly off-center. Used copies in very-fine condition are uncommon and any examples used on-document are scarce. Because they are so scarce, we'd like to conduct a usage census. We'll show another example of on-document usage in a future blog and Bob Mustacich shows a nice single-copy usage on a travel insurance policy near the bottom of his homepage. I've also seen a block of four used on a check. That's four known usages. If you have, or know of, other on-document examples, please let us know. We'd like to show, and make a permanent record of them.

Scant information about The Preferred Accident Insurance Company appears online. Although the company may have been formed earlier, it did not incorporate until 1893. The firm apparently ran into financial difficulty in the late 1940s as it was voluntarily taken over by the Superintendent of Insurance of the State of New York in 1949. The company's remaining assets were liquidated as of April 30, 1951.