What is in the Sample Books?

Concerning the sample book at auction in the Siegel Rarities of the World Sale, I asked Scott Trepel if he could scan a page or two for me if it wouldn't damage the book, but he replied that it was too fragile to do that. That's understandable.
If you want to see some cut-down samples from one of those books, read on.

A one-cent imprint on a wallpaper-like background. 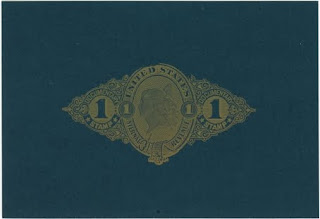 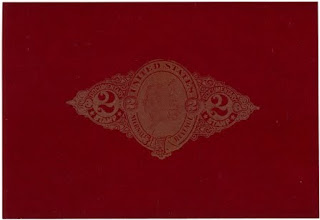 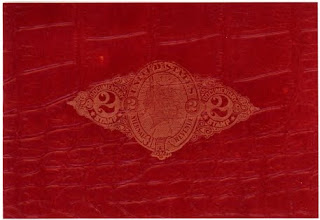 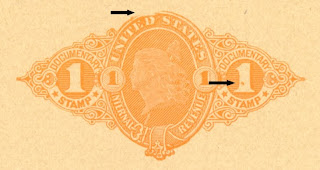 The one-cent imprints have one repeated plate flaw, and one that occurs on some copies, but not all. The chunk out at the top occurs on all that I have seen, while the dot in the numeral occurs on two, but not all. 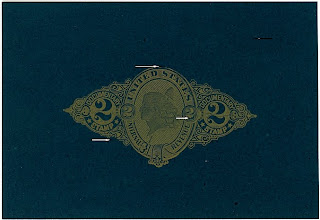 The two-cent imprints also have a flaw at top, stray lines at bottom right of the rightmost small "2", and a large chunk of the bottom scroll missing on the bottom left side on three copies in my collection. However, the item below does not show any of these flaws. If it was not from one of the books, why would anyone print it on moire paper? Very elaborate printer's waste? 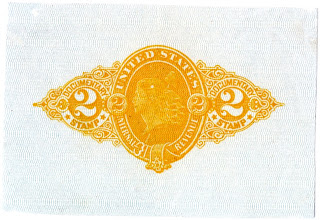 There are a number of questions concerning the imprints on clearly unsuitable paper. First, who created the books? The Bureau of Engraving and Printing certainly did not need to "sell" the designs to the selected security printers who printed them. Since there was so little time to come up with designs in the first place, it is difficult to believe that the books were prepared to convince government officials to adopt them - all the work in printing and preparing them would hardly have been necessary. Surely a sample on plain paper would have sufficed.

On the other hand, it is unlikely that the Bureau would have sent flawed dies to any one of the twenty-eight printers that were selected to apply imprints in the first year. Unless, and this is far fetched, the Bureau required each to print up something like this in order to get a contract - but again, there was so little time between passage of the revenue law and appearance of the first imprints - less than a month - that it is difficult to believe that the Bureau would have had time to do anything like this.

Somewhere I got the idea that there were two of these books in existence some years ago, plus at least one cut up. (I know one is cut up - I have chunks of it - and perhaps from two different ones?) Since some of the imprints seem to have flaws that others don't, do ones from different books show different flaws, and perhaps somewhat different papers? That's why I would love to have been able to see a page from this book. It might have cleared up this question, and given us a clue to just why these books exist (assuming more than one still does.)
Posted by Bob H. at 5:00 PM