This past Tuesday, I raised the difficulties posed in trying to update the Chappell/Joyce Printed Cancels list in view of new data presented in the Joyce/Buford data sets.  In this post I examine that difficulty with the first company listed in the Chappell/Joyce list:  Abbott Alkaloidal.

Abbott Alkaloidal is the predecessor of Abbott Laboratories, an S&P 500 component, and a very large 21st century pharmaceutical firm.  But whatever its future success after the pure food and drug laws of the early 20th century, the mid-20th century Chappell/Joyce list of Abbott Alkaloidal's printed cancels was not so successful or complete.  To wit: 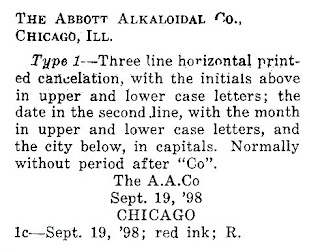 The Chappell/Joyce entry for Abbott Alkaloidal shows the existence of a single, 1c proprietary, cancelled on September 19, 1898.  To understand the problem, here are the the cancels documented to exist in the newer Joyce/Buford spreadsheets: 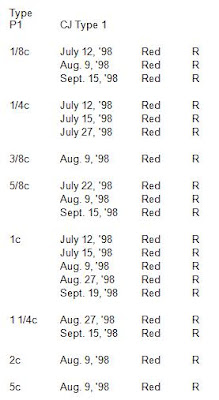 The above list comes from the Joyce/Buford spreadsheet files.  And it shows far more than one printed cancel produced by Abbott Alkaloidal.  Obviously, sometime after the 1950s, a whole bunch more Abbott Alkaloidal cancels came to light for the compiler of this second list.  The compiler labels the cancels as type P1, or printed type 1, as the same lists also include handstamp types labeled as H1, 2, 3...  In addition, the label CJ Type 1 refers to the Chappell Joyce type from the 1950s list.
I only have three examples of these cancels to display in this post: 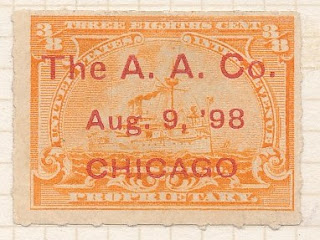 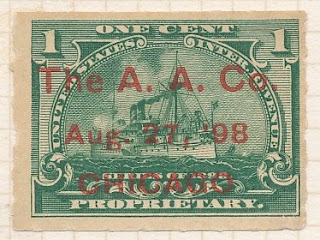 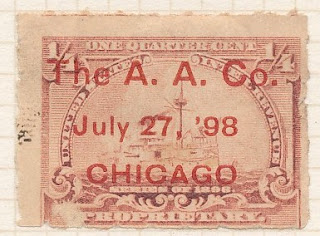 It is clear to me that merely posting the C/J lists against the J/B is a useful activity.  Over time, more complete listings with color examples like those above can be made available.  But this is merely the first company to be reviewed this way.  I think I will revisit some of the companies already posted on this site, like Hobron or Anglo American Drug, and see what the J/B lists have in store.
Those posts are coming soon.
Posted by John Langlois at 10:09 PM