An auction lot that I acquired several years ago included an old quadrille page with a set of round-perforated battleship proprietaries.  One of the stamps, a 1/8 cent stamp, is overprinted "Private Perforated."  This set of stamps, which included values ranging from the 1/8 cent to the 4 cent proprietary, was a mystery and had no explanation included in the auction lot with regard to what these stamps were and why they existed.  Perforations of this sort were never used on the battleships, and the examples in the set I acquired clearly show that the perforations were executed on top of existing rouletting. 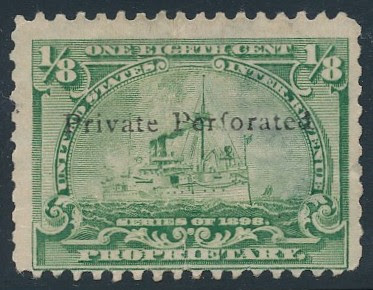 The American Revenuer is often a great source of information on phenomena like this, and indeed, in this instance, there is an article on these perforations.  The February 1976 TAR includes an article by Ogden Scoville, ARA 531, entitled "A Battleship 'Joke', J. D. Bartlett, Crank's "Private Perforated"".
Mr. Scoville writes:
The Spanish American War has produced quite a few revenue cancellations and some "jokers."  Most of us are familiar with the "BIG 4" cancel on the proprietary battleship, but here is one more.
I have in my collection a business (?) card measuring 77 1/2 x 51 mm.  It reads J. D. Bartlett, followed by the word "Crank" in very small letters.  On the second line is "S. of P." and "No. 57".  The S. of P. stands for the Sons of Philately, which was a stamp club active in the east just after the turn of the century.  His address was given as Springfield, Mass.
Pasted on the card, which is yellowed with age, is a 1/8 cent green battleship proprietary with the words "Private Perforated" in one line with caps.  It is 2mm high and 21mm long, in very light type.
So here it is some 75 years after issue that a collector is being remembered with his own stamp. 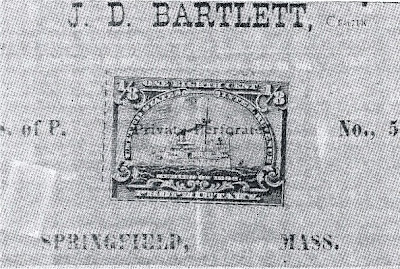 Image of the Bartlett card included in TAR Scoville article
Mr. Scoville does not refer to the existence of a larger set of these stamps, though in the collection I purchased the 1/8 cent stamp was part of a larger effort to place bogus perforation on proprietary battleships.  The entire collection is posted below. 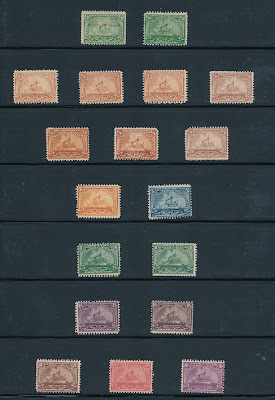