The search for 1898 documentary printed cancels hasn’t led to many collectors volunteering scans of their stamps. I suspect there just aren’t many collectors out there of this material. There probably aren’t that many new discoveries to be made either, as this is a reasonably well travelled field by collectors like Harold Field, Clarence Chappell, and Morton Dean Joyce, and accomplished dealers like Richard Friedberg.

But this hasn’t meant there haven’t been a few surprises. Via Frank Sente, Tim Kohler provides evidence of a second Windsor County Clerk cancel, this one by Karl Pember, to go along with a J R. Pember cancel that can be found in Frank Sente's collection and mine. Neither of the stamps made it into Chappell’s or Fullerton’s lists of documentary printed cancels. 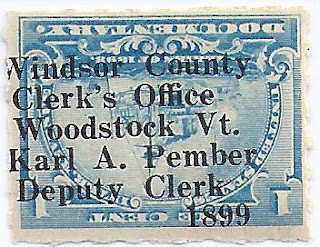 Two recent purchases made on Ebay have been great finds.

The first is a Provident Savings Life cancel on an R173. Sold as an individual lot, the stamp sold for about five bucks, and had no more than two or three bidders. Clearly, this sort of item does not have a big market. But for me it adds to a collection of these cancels that includes cancels on R172 and R174. I suspect there are other values that have these cancels, including R170. But as few have ever targeted these items for collecting (no mentions by Chappell or Fullerton), they are orphans and can be found cheaply. Good for some of us! 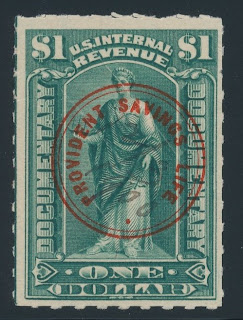 Now the second Ebay purchase is an even bigger deal, mostly since the cancel is listed by Chappell and Fullerton and received a rank of 4 by Richard Friedberg on his “scarcity index” published in a 1995 edition of Linn’s Stamp News. Better yet, the Ebay lot included three copies of the cancels, with the stamps all on their original documents. 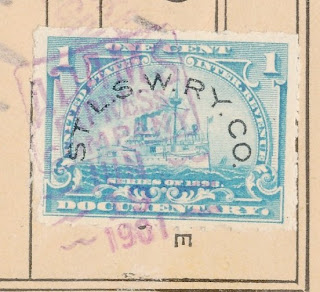 This stamp, and the two other copies that came along with it, were not hidden by the seller, but were pictured in plain view by the seller. But they were hard to spot.

The above screen capture is how the Ebay browser looking through the US revenue listings would have seen this lot. Unremarkable revenue documents, with a common New York stock transfer stamp the most prominent item, dominated the scan of the lot. In the center, though, appear three 1 cent 1898 documentaries, on Adams Express waybills. At first glance my eyes caught a pattern on all three stamps of an arced cancel of some sort. The enlarged image made it clear that the stamps were the printed cancels of the St. Louis Southwestern Railway, and that they were on Adams Express documents for shipments heading to Philadelphia. The appearance of one of these stamps would have been a surprise, but three, all on document?

The search continues...
Posted by John Langlois at 8:00 AM