Its been quite awhile since this site has considered proprietary printed cancels.  For a period, going back over one year ago,  I began to survey the cancels in Henry Tolman's former collection against the Chappell/Joyce list of proprietary printed cancels.  But then came along a new data set, one that was generated from the former collection of Morton Dean Joyce.  That collection was purchased by Bill Buford.  It is now in the hands of yet another collector.  However, the data set, minus the "Ds", was overwhelming.  The amount of material, including new varieties, compared to the published Chappell/Joyce list, is massive.

So I decided to withdraw for awhile.  Instead, I've focused on Richard Fullerton's short list of documentary printed cancels, a much easier task to master.  That pursuit has led to an article published in the American Revenuer, and many posts on this site.  Many collectors have shared information and scans, and their help is appreciated.

But it is time to wade back into the major sea of proprietary printed cancels.  This time around, though, I'm not targeting the update of a list of these cancels for any time soon.  This project, in order to feel like a hobby rather than a pain-the-arse, will have to be taken slowly, and with plenty of diversions and distractions to make it seem not so much like I am conducting an inventory exercise at a Walmart.  The stamps, even if I had all of them, don't have bar codes.

The On Beyond Holcombe series has so far told the stories of proprietary medicine firms that used handstamp cancels, and has kept proprietary battleships alive on this site for the past few months.  During those months I've begun to look at the Joyce/Buford data, the +50 year old Chappell data, and the few stamps that I have access to from the Tolman collection.  And there is lots to write about, without preparing endless lists which would largely draw from the Joyce/Buford data.  Either way, though, there are lists to be prepared, but I'm only going to work on them as I find the pursuit interesting and fun.  Little by little, with the help of readers of this column, the lists can be modernized and explored, and made whole with color scans and stories of the firms that used the stamps and cancels. 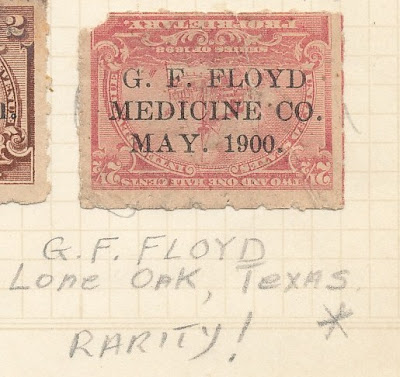