Just before the listings in the Scott Catalogue for R190 to R194, the green commerce dollar values, the editors provide this marginally scrutable statement:
Warning:  If Nos. R190-R194 are soaked, the center part of the surcharged numeral may wash off.  Before the surcharging, a square of soluble varnish was applied to the middle of some stamps.
Unfortunately, there is nothing else written about this little varnish square and when it was applied over the lifetime of the issue, which was very short.  These stamps were issued in 1902, and their use was discontinued after June 30, 1902 with the expiration of the Act that authorized the taxes.  But delve into any dealers stock or private collection of these issues and you will no doubt find a mix of stamps that have either a complete numeral or a partial numeral affected by soaking due to the varnish.
While Scott provides a warning about the potential effect of soaking, the warning does not translate into distinct value listings for stamps with either undamaged or damaged surcharged numerals.  Given that these are some of the scarcest of the regularly issued 1898 stamps, it would seem sensible if dealers, collectors and Scott valued stamps with the damaged numerals less than the stamps with complete numerals.  In general this is not the case.  Specifically in Scott, and more generally on Ebay and other popular online sites. 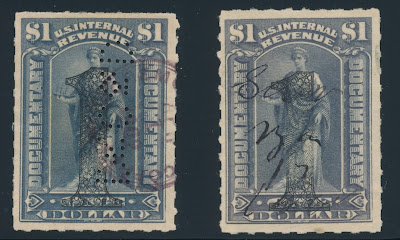 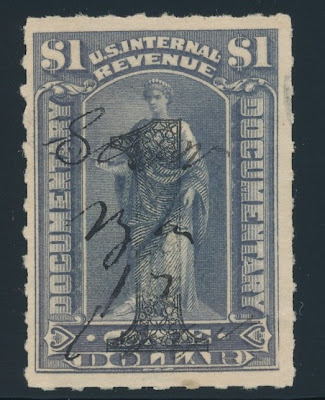 Close-up of numeral damaged from soaking 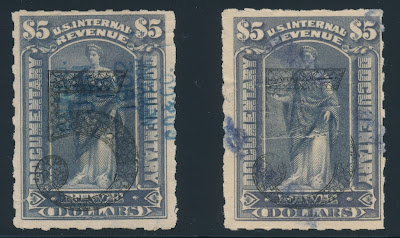 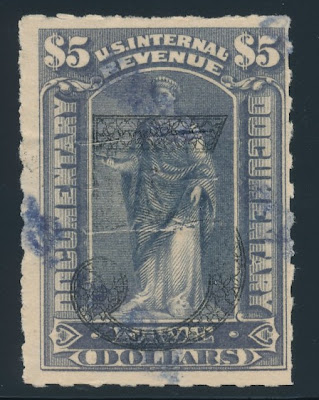 Close-up of numeral damaged from soaking
I have yet to find any research or further explanation of this varnish square in the literature, but would like to know if there has been any work done on these stamps.  All of the copies that I have of these stamps are off document and I would be interested to know if unsoaked varnish squares show in normal light or under a UV lamp.
Posted by John Langlois at 8:00 AM