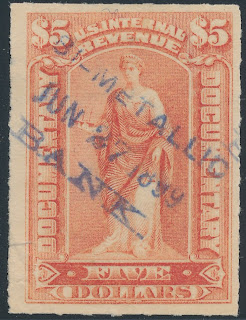 BI - METALLIC
JUN  27  1899
B  A  N  K.
R175 5 dollar documentary
The Bi-Metallic Bank was so named in the late 19th century when bi-metallism had become a major national political issue.  Bi-mettalism as a standard had been dropped during the Civil War, and the United States issued "greenbacks," unbacked paper currency.  In 1792, the US had passed the Coinage Act designating a ratio in value between gold and silver of 15:1, and the value of the dollar was supported by either of these metals at this fixed rate.  After the Civil War, the Fourth Coinage Act was passsed, resuming a metallic standard for the dollar, but for gold only.
The Fourth Coinage Act angered proponents of monetary silver.  Silver proponents included populist politicians like William Jennings Bryan (the Cross of Gold speech), and silver mine owners.  William McKinley ran on a gold only standard, defeating the Bryan free silverites in the Presidential election of 1896.
The Bi-Metallic bank was based in Cripple Creek Colorado, and its owner, David Moffat, also a railroad baron, was pro-silver.
David Moffat

Bi-Metallic Bank in 1896 after its destruction in a labor riot.
Posted by John Langlois at 12:01 AM