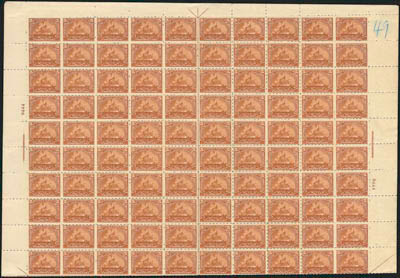 Lot 951 listed for $36,716.05
The upcoming Robert Siegel sale June 21-24 includes lot 951, described as:
"Twelve items, including sheets of ten of the twelve denominations, others include No. RB26 block of 128 with single imprint and plate no. at lower right and No. RB29 block of 108 and rouletted 5 1/2 without imprint or plate no., all others with imprint and plate nos. at left and right, few imperfections to be exptected in so many large multiples including few perf separations sensibly reinforced or rejoined.
FINE-VERY FINE.  A RARE AND DESIRABLE ASSEMBLAGE OF MULTIPLES CONTAINING PANES OF 100 OF TEN OF THE TWELVE DEONOMINATIONS OF THE 1898 BATTLESHIP PROPRIETARY ISSUE.

Scott retail as blocks of four, singles, and plate blocks (where listed) for the panes, and as blocks and singles for the blocks of 108.  Plate blocks are listed but unpriced in Scott for Nos. RB 27, RB29, RB30, and RB31."

*****
Any takers for this pricey set of unused proprietaries?  Given the value of this lot, I am a bit surprised by the imprecision of the description of the lot.  The pictured item above seems to show that the RB31 sheet is RB31p, the hyphen-hole or slot-perfed variety of the stamp.  The likely hammer price on this lot would compel any serious bidder to travel to see the stamps or at least ask for more information.  However, there is nearly an order of magnitude in price difference between the HH versions and rouletted versions of RB31.  Nobody would ever list a classic US postage stamp in an auction and neglect such a distinguishing factor as perf variety.  Such is the ongoing (and 100+ year) lack of respect for battleships.  Scott albums for decades never included spaces for rouletted and HHd battleships.