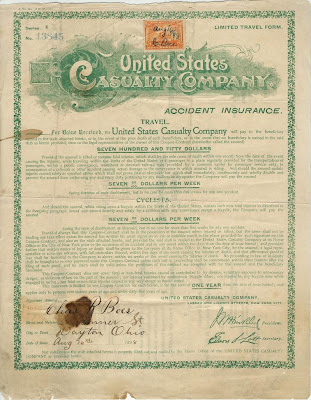 United States Casualty Company Limited Travel Accident Policy
Dayton, Ohio August 16,1898
We previously mentioned the existance of this document when conducting a census of on-document usages of R161, the 1/2-cent orange documentary issue. Now, courtesy of Bob Mustacich,we're pleased to show it. Actually it is just one of two reported solo usages of R161. The other five reported on-document usages all are in combination with other stamps.
The need for a 1/2-cent documentary issue resulted from the one-half cent tax per dollar of premium paid on accident, fidelity,and guarantee insurance policies. R161 usages are rare because it was in use for only a short period of time. Because its color so closely matched that of the 3/8-cent proprietary stamp, the Bureau of Engraving and Printing discontinued printings of the 1/2-cent orange after just two days(the exact total printed is unknown) and changed its color to gray. Proper usages of the subsequent gray 1/2-cent issue, R162, aren't exactly common either; but they are not nearly as scarce as the orange variety.
Unlike many travel accident policies that were good for just one-day, or were trip specific, this one covered Chas R. Boes (who also cancelled the stamp)of Dayton, Ohio for a full year; although the death benefit was only $750, much less than the $5,000 that was typical for most single day policies. 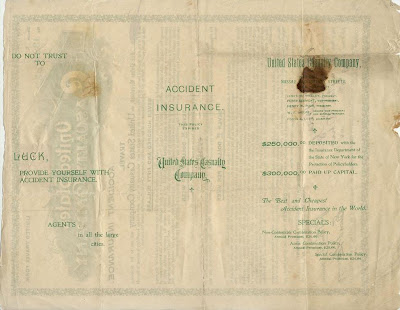 Reverse Side of Policy
The census of on-document usages of R161, the 1/2-cent orange documentary, stands at seven reported documents. If you can add an additional usage please contact us, with scans if possible, at 1898revenues@gmail.com.
NOTE: Bob Mustacich , along with Tony Giacomelli, authored The Battleship Desk Reference: A Study Of Proprietary Battleship Revenue Stamps And Their Cancellations. It's an invaluable guide for anyone interested in the proprietary issues. For more information visit Bob's website.
Posted by Frank Sente at 6:00 AM