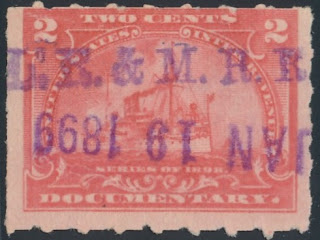 In September 1898, the Choctaw, Oklahoma &amp Gulf Railroad (see a certificate of this railroad in this post from July 2010); leased and later purchased the Little Rock & Memphis Railroad.

The LR&MRR, a held the distinction of operating over the first railroad trackage in Arkansas. The LR&M had been in and out of receivership since the late 1870s, a situation caused by Jay Gould's diversion of through traffic to his own lines. The CO&G, owned by Philadelphia investors (The Girard Trust Company of Philadelphia issued the above mentioned cert) and coal mine financiers, sought entry into Memphis to expand their market for coal produced by company mines in Indian Territory (eastern Oklahoma).

The St. Louis, Iron Mountain & Southern, a Gould railroad, bitterly opposed the CO&G entry into Little Rock because it threatened Gould's near monopoly in the area. One of the Gould tactics to discourage CO&G expansion was a refusal to allow CO&G operation over either of the existing Arkansas river rail crossings (Baring Cross and Junction bridges) at Little Rock.
Posted by John Langlois at 12:01 AM