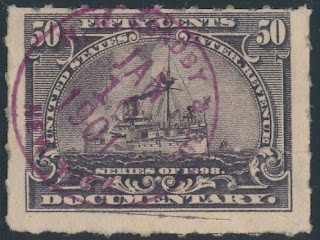 W. H. GOADBY  & CO.
JAN
10
1901
NEW YORK
Located at 8 Wall Street in New York, Goadby & Co., was a securities firm.
From a rather odd propaganda-based website.:
"Although the firm of Goadby & Co. had not been established or at any rate did not bear that name until April, 1876, Mr. Goadby had been a member of the Stock Exchange for several years previously. His membership dates from Dec. 31, 1870.... The partners who now make up the firm are Courtlandt D. Barnes, Harry G. Miles and Charles Morgan, the last a board member.... His extensive holdings of securities gave Mr. Goadby a place on the boards of several important corporations, his directorships including the Sloss-Sheffield Steel and Iron Company, the Twin City Rapid Transit Company, the Lanston Monoype Machine Company and the Sheffield Company of Sheffield, Ala." He was the son of Thomas Goadby, an Englishman who came to the U.S. and made a fortune in real estate. (William H. Goadby, Broker, Dies At 76. New York Times, Jul. 5, 1925.) His nephew, W. Goadby Loew, married George F. Baker's daughter, Florence. In 1941, W.H. Goadby & Co. was merged with H.N. Whitney & Sons, and became H.N. Whitney, Goadby & Co., of 49 Wall Street.
Posted by John Langlois at 12:01 AM