John and I were discussing the last year of the various Spanish American War taxes, which prompted me to look at the dates on some of my bills of lading since the one-cent tax remained on them for that final year between July 1, 1901 and July 1, 1902. One that was dated in that final year was this bill used by the Montpelier & Wells River Railroad on November 8, 1901. 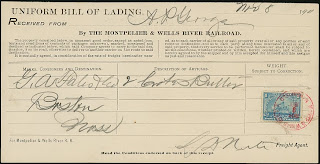 The railroad consisted of 38.22 miles of single track between Montpelier and Wells River in northern Vermont, plus a 3.38 mile spur to Barre. It became part of the Barre & Chelsea in late 1944. That line was absorbed by the Montpelier & Barre in 1957, which became part of the Washington County Railroad in 1980. At least part of the route has been converted rail-to-trail over the last few years. 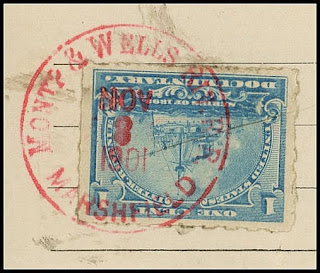 The cancel is from the Marshfield office. 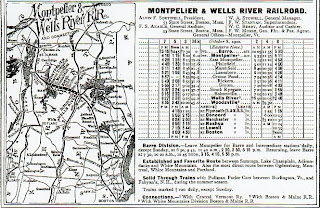