This is a continuation of a series of posts about Ocean Passage tickets. 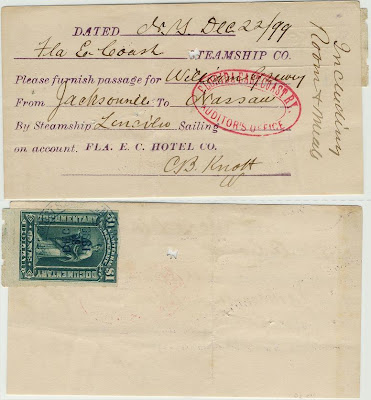 Florida East Coast Steamship Company
Ocean Passage Ticket
Jacksonville, Florida to Nassau, Bahamas
December 30, 1899
A fourth Florida East Coast Steamship Company Ocean Passage ticket has surfaced. All four tickets are from the same party, purchased December 22,1899 in New York and presumably all used December 30, 1899. At least the $1 stamps on all four tickets were cancelled on that date.
I'm not sure about the last name of the traveler listed on this ticket, but William's known companions via the steamer Lincoln were Miss Lizzie Johnston, Thomas Charleston, and Miss Agnes Munroe whose tickets previously have been reported. Were there others on this same New Year's holiday trip to the Bahamas? How did these four tickets reach the philatelic market? We may never know the answers, but our thanks goes to Bob Mustacich for adding to the census of known ocean passage tickets by reporting this one.
Eight tickets now have been reported. Seven bear the $1 Commerce Issue appropriate for tickets costing $30 or less. A single ticket bearing a $5 Commerce stamp, appropriate for a ticket costing more than $60, will be featured in an upcoming blog. We're still looking for a usage of the $3 Commerce stamp, appropriate for tickets costing more than $30 to $60.
Anyone having knowledge of other taxed Ocean Passage tickets is invited to report same, with scans if possible, to 1898revenues@gmail.com.
Posted by Frank Sente at 1:00 PM