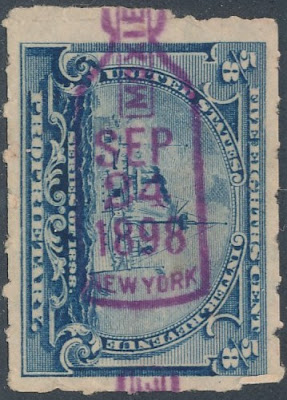 MOXIE
SEP
24
1898
NEW YORK
Clear and nearly complete Moxie bottle-shaped handstamped cancel.  This stamp just arrived in the mail and I like it so much I wanted to post it right away.  If this stamp was attached to a single bottle of the soda, the drink was fairly expensive stuff, as 5/8c paid the tax for a product priced between 15 and 25 cents.
Bob Mustacich displays a 5/8c stamp with this cancel on his website.
I've borrowed copy on the history of this soda from the Marietta, Ohio, Soda Museum. 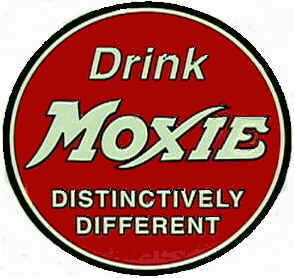 The history of Moxie from the Marietta Soda Museum:
The word "Moxie" means courage, guts, self-sufficiency, chutzpah, confidence, fighting spirit, and nerve -- it also took a lot of moxie to swallow more than a mouthful of the stuff. At best, the flavor has been described as unforgettable. Early advertising campaigns informed potential patrons that they would have to "Learn to Drink Moxie." The thought of people drinking this stuff out of pleasure is incomprehensible, yet Moxie has a strong following who will drink no other soda. In fact, as late as the 1920s Moxie was our nations most popular national brand.
Augustin Thompson was born on November 25, 1835 in Union, Maine. He grew up on the family farm, and when the Civil War erupted, he enlisted in the Union Army with some buddies. He must have been a pretty bad dude, because he went from private to Lieut. Colonel by the end of the war. After the war he enrolled in medical school and graduated from Hahneman Hospital in Philadelphia.
Once he graduated he setup practice in Lowell, MA and was soon developing and offering patent medicines to supplement his medical practices income. Patent medicines were extremely popular at the time, and had made millionaires of several entrepreneurs (and at that time a million dollars really meant something). In fact, Lowell, MA was already home to three very popular patent medicines, and in 1876 Lowell became home to a fourth -- Moxie. This gentian root flavored extract was a nostrum, which meant that it was stronger than a tonic, and was dispensed a spoonful at a time. However, a few years later Dr Thompson had noticed the immense popularity of the soft drink trade, and he decided to make a little modification to his medicine. So, in 1884, Moxie was being sold in a carbonated form and was called "Beverage Moxie Nerve Food." This new version was a HUGE success.

Contains not a drop of Medicine, Poison, Stimulant, or Alcohol. But it is a simple sugarcane-like plant grown near the equator and farther south, was lately accidentally discovered by Lieut. Moxie and has proved itself to be the only harmless nerve food known that can recover brain and nervous exhaustion; loss of manhood, imbecility, and helplessness.

It has recovered paralysis, softening of the brain, locomotor ataxia, and insanity when caused by nervous exhaustion. It gives a durable solid strength, makes you eat voraciously; takes away the tired, sleepy, listless feeling like magic, removes fatigue from mental and physical overwork at once, will not interfere with action of vegetable medicines.

The name Moxie could have came from an old army buddy of Mr. Thompson's like the label stated. However, a thorough searching of Civil War records indicate there never was a Lieut. Moxie. Most likely the name came from Mr. Thompson's boyhood home. Mr. Thompson grew up in the state of Maine where there is a Moxie Falls, a Moxie Cave, and a Moxie Pond. Maine also had moxie berries and moxie plums. The word Moxie is probably Indian in origin, and nostrums were frequently marketed as if they had come from secret Indian recipes. With all of this being said, the chances that there was ever a Lieut. Moxie are pretty slim, and if Mr. Thompson wasn't completely truthful about the origins of Moxie then can we believe what he says about the ingredients Moxie contained?

Moxie was very bitter and medicinal tasting, and gentian extract is generally given credit as being the primary ingredient. However, Dr. Dale Covey's book "The secrets of the Specialists" published in 1903 claimed Moxie was a decoction of oats flavored with sassafras and wintergreen. Lending credence to this theory is an old label of Moxie that depicts a woman carrying what appears to be oats. A later label lists the ingredients as water, sugar, cinchona (a bitter bark from South America), alkaloids, caramel, and flavoring. In any event, the formula to Moxie would be revised over the years, but it always (with one exception) retained a bitter or medicinal flavor, and up until the 1960s sassafras was a main ingredient. When the use of sassafras was outlawed by the FDA in the 1960's the formula had to be revised. Over the years Moxie had also declined greatly in popularity, and in 1968 the Moxie company made their famous tonic sweeter to compete with other soft drinks. BIG MISTAKE! They not only didn't win over any new patrons, but also seriously enraged the Moxie faithful and lost 50% of their loyal customers almost overnight. In 1980, Moxie would change their formula back, and today Moxie is flavored with primarily gentian root and wintergreen, and although it still lacks sassafras it taste pretty similar to the way it did before the FDA outlawed sassafras.

One last note on the original ingredients that composed Moxie. According to "Beverages" written by Charles Sulz in 1888, the popular "Nerve Foods" that are being sold use cocaine as their primary ingredient. (Authors note: I have dozens of old soda fountain formulary guides and Mr. Sulz is easily the best and most thorough book I have read at over 800 pages -- one of my favorite books). Just keep in mind that in the 1870s when Moxie was invented that cocaine was considered beneficial, and not harmful in the least (the original Coca-Cola formula also contained cocaine). Clearly opinions changed, and by 1906 the Food and Drug Act outlawed the use of cocaine and Moxie had certainly removed the cocaine from their formula by this time. However, the early use of cocaine in the drink does make since -- it fits in with the plant grown around the equator, it was reputed to address the same problems that the early Moxie cured (nervous exhaustion, loss of manhood, etc.), and it explains why people would buy a second bottle of this bitter tasting concoction.

Another reason that Moxie was so popular was because of its prodigious advertising, and Frank Archer was the man responsible for Moxie's advertising campaigns. A student of advertising would do well to study a case history of Moxie. When it was being advertised it grew to become the world's most popular soft drink, but when advertising dollars were reduced it disappeared into near extinction. As was said earlier, Frank Archer spearheaded Moxie's advertising campaign and that handsome man pointing at you and telling you to drink Moxie is probably Frank Archer. No one knows for sure, but there is some strong evidence supporting this theory. This poster, and slight variations on the same theme, was one of Moxie's most successful campaigns. Just like the old "Uncle Sam Needs You!" poster, the eyes follow you wherever you go (try it -- lean you're head to one side of the screen -- spooky huh?). And check out that smile -- Mona Lisa might want it back. Do you want to drink some Moxie now?

Up until 1920 Moxie was outselling Coca-Cola, but Moxie made the same decision that a lot of soft drink producers made when sugar prices skyrocketed. They bought large quantities to protect themselves from future price increases. Unfortunately, prices collapsed and they were forced to sell their product at a loss. This also meant that they didn't have the money for advertising so they cut back dramatically. They should have borrowed the money, because without advertising sales also declined dramatically and they never recovered. You would have thought they learned their lesson, but a couple years later, when hit by the Great Depression, they cut back on advertising again.


A few years after the great depression Moxie was split into two companies with F.E. Thompson (the inventors son) as president of The Moxie Company, and with the Frank Archer serving as Vice President. The Moxie Company retained the bottling rights to New England. The other half of the company was Moxie Company of America with Frank Archer serving as president and this organization he had the right to distribute Moxie over the entire nation with the exception of New England. Mr. Archer, the great advertiser, was never able to get the rest of the nation to drink Moxie in great numbers. However, Moxie wasn't completely dead, because in 1967 they bought the National Nugrape Company and the two companies formed the Moxie-Monarch-Nugrape Company of Doraville, GA in 1968. It was shortly thereafter the taste of Moxie was changed to be sweeter and more contemporary, which went over like a lead balloon. At the time the new company was formed, Moxie was its best selling brand, but every year fewer and fewer bottles of Moxie were sold. Monarch went on to became a huge success, and they soon had over 1,000 bottlers with such brands as NuGrape, Grapette, Suncrest, Kist, Nesbitts, and many other brands. Moxie can only be purchased in New England, and even there it is often hard to find.
Posted by John Langlois at 5:00 AM