In the current January 2011 edition of the American Philatelist is an article by Robert M. Bell entitled Keightley's Philatelic Sistine Chapel.  The article is about a calendar of the British Penny Lilac stamp that begins July 11, 1881 and end January 1, 1902.  Walter Keightly put this calendar together, and assembled a nearly complete run of cancel dates for this entire period, with 7,457 dates complete with cancels of the 7,476 possible dates.  The Penny Lilac stamp had a lengthy run of over 11 years, making the assembly of such a calendar an enormous task.  There is a scan of a page in the calendar from November 1886, with mostly clear and complete CDS cancels.

Robert Bell writes the following about philatelic calendars in general:

There appears to be little literature about philatelic calendars.  Nothing, as far as I have found, compares to the Keightly calendar.
James Chemi (late former editor of the The American Philatelist) discusses calendars and mentions the collection of of a Lawson Nagle.  This involved the US 3 cent orange-brown stamp of 1851-55 (Scott 10).  Nagle's calendar collection spanned only a single year, 1852, which was a leap year, and the original collector of these 366 stamps is unknown.
Donald Landis of Madrid, Spain mentioned a calendar that he was building.  However, this calendar comprised socked-on-the-nose or hand-written cancellations from any issue or country, and he was aiming for every day since 1860, or (then) about 48,000 days.  Landis reported subsequently that his collection had reached 40,000 specimens, with many nearly complete months in his albums; in particular, July 1911 was illustrated with just one day missing.  Tangentially, we hear from Landis that there was a Bull's-eye Cancel Collectors' Club; it seems to have become defunct in 1994 but has enjoyed a successful revival since 1999 (see: http://bccc.jeffhayward.com/).
Jerry Jensen uses the term "Date of use collection" for a calendar of mixed German issues.  Pages for the months of March, 1921, January 1894, June 1873, and August 1948 appear in his article.  The collection has specimens beginning in 1872 and had by 1992, the collecting potential of 43,000 stamps/days.  There was no measure of the completeness of the collection.


Robert Bell does not mention any attempts to complete calendars with revenue stamps, whether of US revenues or those of other countries, though the Penny Lilac is of the "postage and inland revenue" variety.  Yet there has been at least one article over the years in the American Revenuer on building this type of calendar for a US First Issue revenue stamp.  Over the past two years I have referenced a calendar in my possession of the 2 cent documentary battleship.  The calendar runs for the 36 months in which most of the 1898 tax act applied (some taxes continued for an additional year).  Virtually all days except for Sundays are complete in the calendar for the full 3 year period.  What makes the calendar most remarkable is that nearly all of the cancels come from transportation related businesses.  The calendar is dominated by railroad and related business handstamps.  For example, there are many business like linseed oil companies and other railcar holding companies.

I am posting the first 12 months of this calendar today, and will post the remainder, by year, before the end of the month. 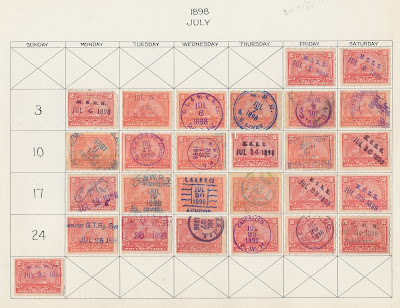 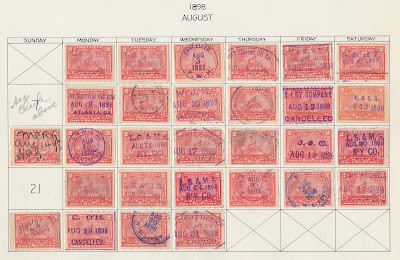 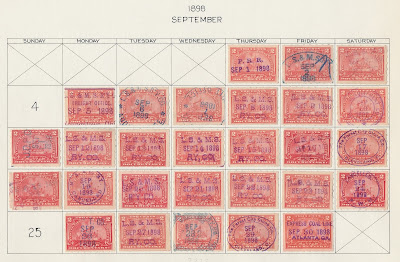 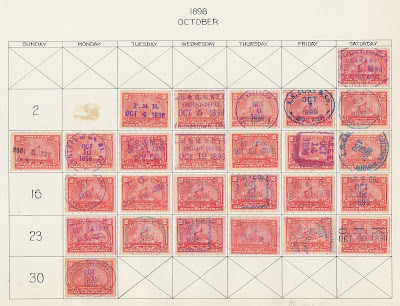 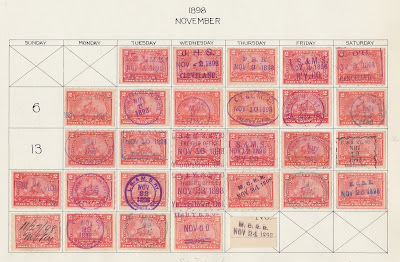 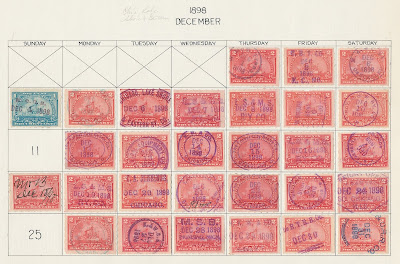 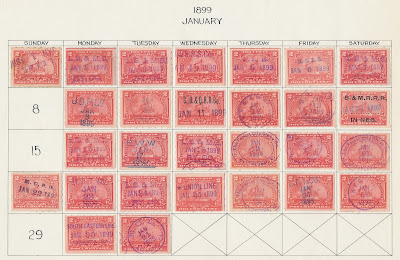 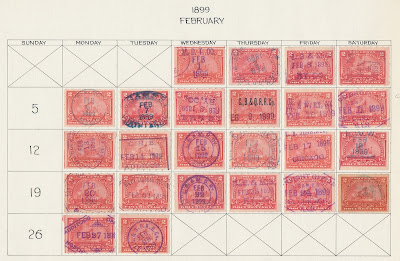 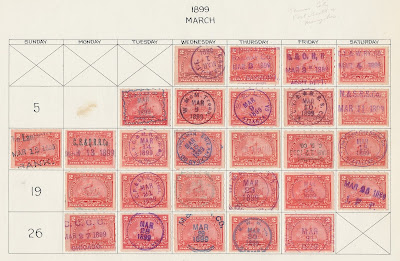 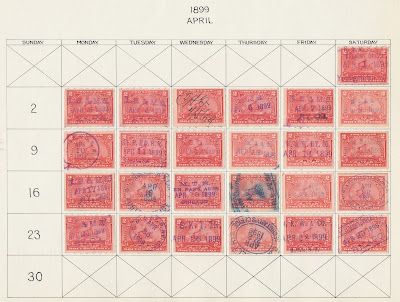 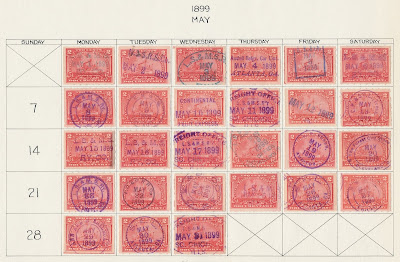 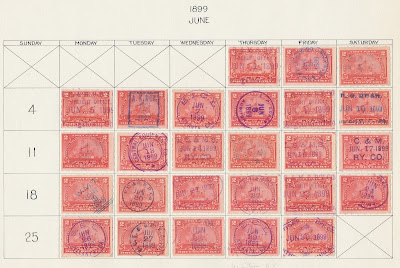 Posted by John Langlois at 5:30 AM