"Every mile is picturesque."

That was the slogan of the Delaware, Lackawanna & Western in 1901. This well-kept and financially sound railroad was a bitter rival of the much larger New York Central and Pennsylvania lines, but it managed to remain independent from 1853 until 1960, when it merged with the Erie to form the Erie-Lackawanna.

In 1901 the line ran from Buffalo to Hoboken, New Jersey, conveniently adjacent to new York City, with short spurs to Oswego and Utica in New York and Northumberland in Pennsylvania, just under 1,000 miles of track. It was described by Edwin Herbert (jcrhs.org/dlw.html) as being "the cleanest and most carefully maintained high iron in this country."
The paymaster's draft below was used to transfer payroll funds to the Lackawanna's office In Scranton, Pennsylvania. Scranton was the point on the Buffalo - Hoboken line where the route to Northumberland branched off, and the Scranton Division had its own Superintendent at the time.

The handstamped cancel is rather faint, but hopefully can be seen. 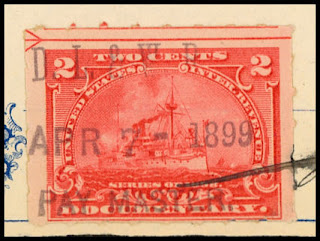 The earliest Lackawanna check in my collection is this one made out to the Northern Steamship Company in December of 1898. It does not specify any bank, but was cleared through the Marine bank of Buffalo and the National Bank of North America in New York city. There is a nice cancel of the railroad Treasurer's Office just above the imprint.

In 1899 the Lackawanna appears to have gone hog-wild so far as check styles are concerned. I haven't made any effort to collect all of them, but here are four used during the year, all with different colors and type styles, and none specifying a bank. The lack of a bank would not be unusual if these were merchant's drafts, collecting amounts from other railroads or merchants, but they are not.
February, 1899, a check signed by W.F. Holwill, General Passenger Agent, to purchase one first class ticket from Philadelphia to Plymouth on the competing Pennsylvania Railroad. It was presented to the Girard National Bank of Philadelphia and cleared through the Chemical National Bank of New York.

February, 1899, a check signed by H.C. Hicks, General Freight Agent, to pay a car service charge claim to one M.I. Archibald. It does not appear to have been cleared through any banks. Petty cash?
The check is quite different in style to that used by the General passenger Agent the day before, though both were operating out of the New York City office.

March, 1899, another check to the Northern Steamship Company, this one for twenty-two claims. It was signed by H.C. Hicks and originated in the General Freight Department like the check above, both for use with claims. Apparently the check style changed completely in the intervening month.
The check was presented to the Marine Bank and cleared through the National Bank of North America, as was the one from 1898.

April, 1899, a third check signed by Hicks, entirely different again. This was written to one C.L. Hackstaff, probably the General East Freight Agent at the time, who cashed it at the Ninth National Bank of the City of New York.

All of these checks show Fred H. Gibbens as treasurer. By 1901 he had resigned, died, or retired, as Fred F. Chambers, previously Secretary, is listed in the Official Guide of the Railways for February 1901 as both Secretary and Treasurer. Hicks had been replaced by P.J. Flynn, and Holwill by T.W. Lee.
One last Lackawanna "check", actually a merchant's draft asking the Indiana, Illinois & Iowa Railroad to reimburse them for ticket sales. It is signed by O.C. Post, General Auditor, who was still around by the time the 1901 Guide was published. 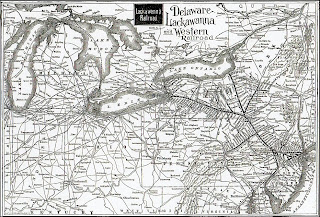