I've already posted checks and merchant's drafts written by the Delaware, Lackawanna & Western Railroad. The following examples are merchants' drafts written to collect from the Lackawanna. 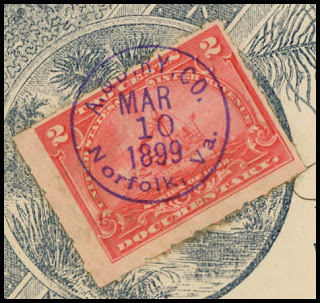 A close-up of the cancel.
The other six drafts involve rental of railroad cars. The Lackawanna was c
Publish Post
arefully managed, and did not own huge fleets of cars of its own.
The first two drafts are from the G.H. Hammond Company, which leased refrigerator cars. Sometime in the first three months of 1899 the company moved from using adhesive revenues to using imprinted ones. Both were issued to collect money from the Lackawanna, one for some charges enumerated on a sheet that was once attached, and one for car repairs. 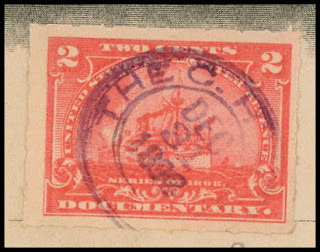 Second, a draft from the Venice Transportation Company of Saint Louis. 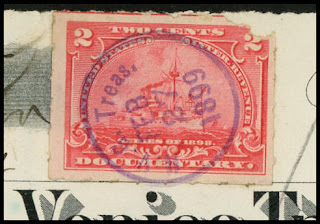 The cancel refers to the company Treasurer, not the company itself.
Next, a draft for car mileage from the California Fruit Transportation Company of Chicago. 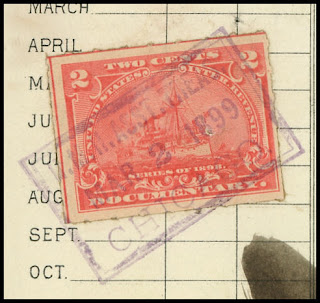 The cancel is that of the Assistant Treasurer of the CFTC.
The Freeman Brothers Refrigerator Line of Pontiac, Michigan apparently did not bother with handstamp cancels.

Neither did the Interior & Seaboard refrigerator Line.

Finally, here is a draft from the Live Poultry Transportation Company of Chicago. 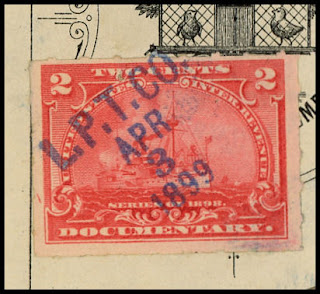 Their cancel does refer to the company, but I wish the stamp had not been placed on top of most of what would have been an interesting logo.
All of these 1899 drafts were directed to F.H. Gibbons in his role as Treasurer of the Lackawanna. As noted in my first post on the Lackawanna, he was no longer serving in that role by 1901.
Posted by Bob H. at 8:30 AM