The Pittsburgh and Western Railway

The Pittsburgh and Western Railway ran as a self-controlled entity from its founding in 1873 until the B&O took it over in 1902, having had a controlling interest in the road since 1884. It had around 200 miles of track in Western Pennsylvania, some of which was narrow (3 foot) gauge. The railway already shows as being in receivership in the 1901 Official Guide of the Railways. At that time its service from Pittsburgh to Cleveland left from the B&O depot, and continued on from there to Chicago via the B&O.

In 1898 when this freight receipt for a barrel of hinges was written the railroad was still running on its own steam, so to speak. 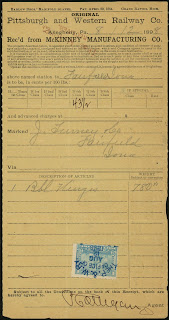 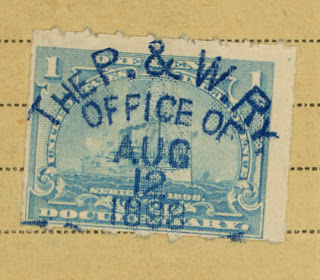 The road's handstamp cancel was striking, if short-lived.
Posted by Bob H. at 7:00 AM