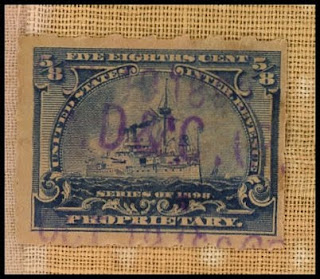 The firm did not use private die stamps during the Spanish-American War tax period. The battleship revenue above has an indistinct cancel of P D & C C; undoubtedly better copies are available. However, the stamp has the distinction of being still attached to an original Cuticura Anti-Pain Plaster costing twenty-five cents. 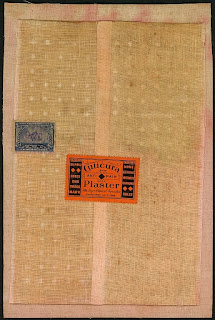 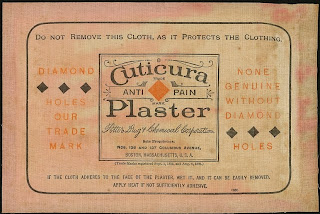 The brochure that was part of the wrapping says that the plaster features, "A New, Original, and Wonderful Combination of Therapeutic Agents.

"Vastly Superior to Every Other Plaster and Pain-Destroying Compound Before the Public.
"In response to many and repeated requests of physicians, pharmacists and others with whom the CUTICURA REMEDIES have become the synonyms of all that is efficient, reliable and elegant in domestic medicinal preparations, we have, after much patient investigation and elaborate experiment, compounded and now offer to the public a Plaster containing the most potent pain-alleviating properties, combined with the choicest essences, extracts, gums and balsams of recent pharmacy and Bible history." And so on, and on, and on.
Cuticura soap can still be bought, and apparently is a good product.
Posted by Bob H. at 12:01 AM