In my last blog about the tax on bank checks we illustrated examples of postage stamps used in lieu of revenue stamps. Because of problems distributing the new tax stamps, the practice of using postage stamps to pay the two cent tax indeed often was tolerated. However using postage stamps wasn't legal and just as often banks would not process checks until a proper tax stamp was added. Processing documents not properly taxed was a misdemeanor punishable by a fine of up to $200 upon conviction.

When the Citizens National Bank check illustrated below was presented to the C.C.S. Bk. (Capital City State Bank) of Des Moines, that bank required a proper tax stamp before cashing it.

The use of a 2-cent Trans Mississippi postage stamp seems particularly odd in this instance. Although dated July 14, 1898, just two weeks into the taxation period, one would have expected C. F. Fox, manager of the Postal Telegraph-Cable Company to know that use of a postage stamp to pay the check tax was improper. His company certainly must have had tax stamps available by this time to pay the taxes on telegraphic dispatches and money wires. Anyway, J. Gibron, the payee, likely paid the two cents for the correct revenue stamp to be added before collecting his $10. 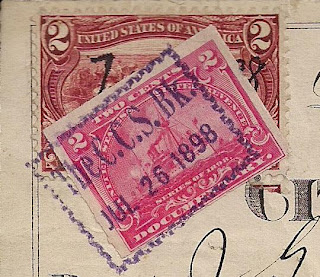 In this instance however the payee, M. C. Beckwith, probably didn't pay the tax. Instead the check likely was held until the payor, M. F. Cridelle, paid for the corrective 2-cent revenue stamp. Looking carefully at the detail of the stamps below, one notes that the added revenue stamp bears the initials of the payor, M.F.C., although not in the hand of either Cridelle or Beckwith, whose signature appears on the back of the check.

Because the revenue stamp also bears a December 15, 1899 S.N.B. oval cancellation from the Second National Bank of Warren, Ohio where Beckwith presented it for payment, a bank clerk probably added the revenue stamp after receiving word that Cridelle paid the 2-cents. Interestingly the added revenue stamp was also pencancelled December 13 although it likely wasn't added until December 15, the date of the S.N.B. handstamp.

The bank's cost to collect the the tax likely exceeded 2-cents. Trying to avoid such processing costs, rather than ignorance of the tax laws, might in part explain why some banks allowed checks bearing postage stamps to clear unquestioned. 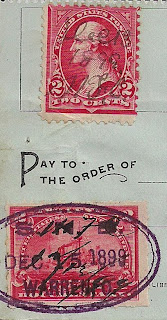 reverse of Kinsman Check showing signature of M. C. Beckwith
and bank endorsements
Posted by Frank Sente at 2:00 AM