Another Bank Check With Postage Use Corrected

A fiscal history mentor once told me to buy items I didn't completely understand or couldn't explain as they likely sheltered interesting stories. I've benefitted from that advise on many occasions.

At a quick glance the check illustrated below is just another example of a check bearing a 2-cent postage stamp in payment of the check tax that was not honored until a corrective 2-cent revenue stamp was added.

The postage as revenue usage was nice, but it was the payee that drew my attention and piqued my interest. Not 2nd Lt. Lanning Parsons personally, but rather the reference to the 9th Calvary. The 9th Cavalry, I knew, was a Buffalo Soldier unit that saw action in the Spanish American War. I wondered where this check might have been written? Denver, the location of the bank upon which it was drafted didn't make sense, nor did Los Angeles where it was cashed.

I started with Wallace Sabin, the payor and Lanning Parsons, the payee. Sabin spent a 40 year career as a contract surgeon with the Army. Lt. Parsons graduated from West Point in 1896 and retired on disability. He later taught military science and tactics at various institutions. From his career notes I learned that in 1899 when this check was written he was stationed at Ft. Apache, Arizona Territory. The 9th Calvary it turns out was stationed there in 1899 in between stints fighting in Cuba and the Philippines.

Could the check possiby have been written there? I became very interested in what the pen-cancel hidden under the revenue stamp might show. Because of the red ink bank cancel I was reluctant to remove the stamps and my quest remained dormant.....for a while. 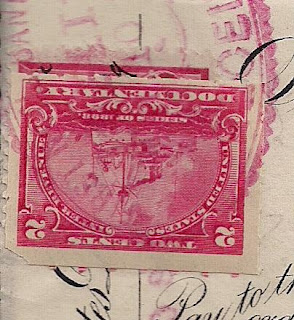 I asked my former collegue at APS, Mercer Bristow, for assistance. Using a crimescope and working from the back side of the check, he was able to highlight the text of the pencancel. He then reverse-printed the result and, voila, the check indeed was written at desolate Ft. Apache where Contract Surgeon Sabin did his best to pay the tax by using a postage stamp. 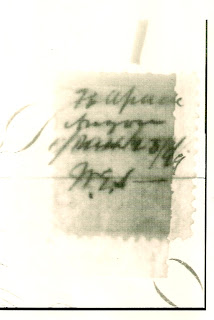 What remained was to determine how the check ended up at the First National Bank of Los Angeles. As shown on the back of the check, Lt. Parsons made the check payable to a third party, J. V. Vickers, who cashed it in Los Angeles.

Vickers was an entrepreneurial rancher and businessman. With two partners he operated a successful ranching operation in Arizona, the Empire Land and Cattle Company, from headquarters in Los Angeles. The disposition of the check finally made sense.

Because of a collapse the Kansas City beef market in 1898 Vickers began scaling back his Arizona operations. Perhaps he was trying to sell beef to the Army at Ft. Apache in 1899.

In 1901 he and Walter Vail bought property on Santa Rosa Island and started a ranching enterprise under the name of Vail and Vickers that continues today. In 1986 the company sold the island to the US government and it became part of the Channel Islands National Park. The firm retained the right to operate private hunting excursions on the island that are due to expire next year.