Section 17 of the War Revenue Law exempted Federal, State and all Local Governments from the stamp taxes in "...their ordinary governmental, taxing, or municipal capacity." Thus checks issued by government agencies were not subject to taxation. The untaxed check drawn on the Orphans' Home Fund of the State of Nevada below illustrates this exemption. 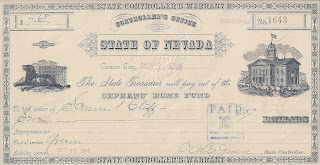 State of Nevada Orphans' Home Fund Check
Carson City, Nevada, November 7, 1898
An even better example is this seven-cent check issued by the US Treasury for interest due on an 1898 War Bond. While the taxes imposed by War Revenue Law raised significant funds to help finance the Spanish American War effort, most of the funds that actually paid for the war effort came via $200,000,000 in Treasury War Bonds authorized by Congress at the same time the War Revenue Law was enacted. The bonds were popular with the public even though they only paid 3% interest and the entire subscription sold out in just a few days. Both coupon and registered bonds in values as small as $20 were authorized. Details of the subscription may be found in this contemporary New York Times article.

U.S. Treasury Check A200289
Washington, DC August 1, 1898
for Interest Due on Deposits for Bonds
Thousands of these checks were issued, but as the vast majority were cashed in at the recognized Treasury offices, the only extant examples are UNCASHED checks like this one. Although David Tischler endorsed this one, he apparently never actually cashed it. Interest was to be paid quarterly but as this check is dated August 1, 1898, barely a month after the bond it represents could have been issued, it likely paid for one month's interest on a $20 registered bond. Perhaps Tischler kept it as a souvenir, or simply failed to cash it within the four month redemption period. I've only seen a couple other examples. Can anyone offer an illustation of an actual 1898 War Bond? 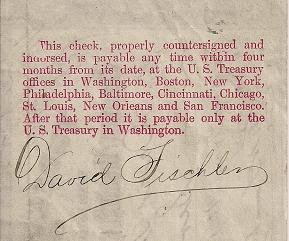 Endorsement Detail of Treasury Check A200289
Signed, But Not Cashed
Internal company pay vouchers, if cashed directly at the company's offices by the payee also were exempt from taxation. The Victor Colorado Independence Mine time check shown below illustrates the exemption. Curiously, while $3.00 was earned, only $2.95 was paid with five cents deducted from the payment for some reason. Remains of the Independence Mine may be toured in Victor, Colorado. 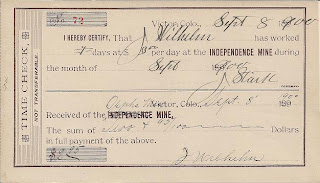 $3.00 Independence Mine Time Check September 8, 1900
$2.95 Payment Effected at the Orpha May Mine on the Same Day
Because Arthur Chapman endorsed his $30 Pacific Live Stock Co. monthly pay voucher over to C.W. Madden, thus establishing a third party taxable event, Madden had to affix a 2-cent revenue stamp before he could cash the voucher at the company offices in Burns, Oregon. Note the "This Voucher Must Bear A Two Cent Revenue Stamp If Presented By Any Other Than The Employee Named Herein" notice in the upper left corner of the voucher below. 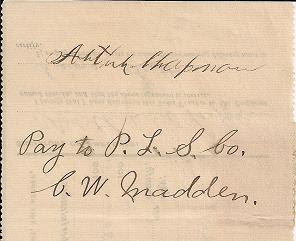 The bank counter withdrawal receipt below illustrates that if one simply went to the bank and withdrew funds directly from their account they could avoid paying the required two cents bank check tax. If they instead wrote and cashed a check payable to "self", a two cent tax stamp would have been required as checks were taxable, but withdrawal receipts were not.