The Fullerton List: A Catalog of Railroad Company , Street Railway Company and Express Company Printed Cancellations on the 1898 U.S. Revenues 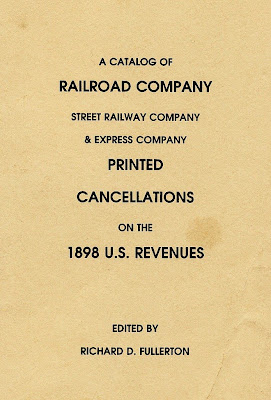 In July 1952, Richard Fullerton of Dayton, Ohio, published a list of known printed cancellations on the battleship revenues by railroads and express companies.  By November of that year he had compiled an addendum of additional cancel types.  The cover to Eric Jackson's 1992 reprint of this list is above.  The reprint consists of a mere 13 pages of printed cancel listings, in keeping with the short collecting field of documentary printed cancels.

Fullerton was aided in his list by some of the notable US revenue collectors of the time, including Morton Dean Joyce, Henry Tolman, and Clarence Chappell, among others.

The list of proprietary printed cancels is endless in comparison to this list, but the printed cancels on the documentary stamps are at least as interesting and in some cases highly elusive.  In the coming days I will post scans of those cancels available to me from this list.

Fullerton limited his list to railroads, street railways and express companies.  He numbered each of the companies by 5s, leaving lots of room for new companies and their cancels in the case of new discoveries.  Those companies that made his list include:

There are non-railway and express firms that used printed cancels on the documentary stamps, including financial firms.  The companies in Fullerton's list and those using printed cancels that are not listed will be explored in the coming days.


The Fullerton list reprint is available for purchase at Eric Jackson's web site.
Posted by John Langlois at 3:43 PM