The War Revenue Law provided for two separate sets of stamps; stamps inscribed "DOCUMENTARY" were to be used only on legal documents with details provided in Schedule A of the Tax Act.

Stamps inscribed "PROPRIETARY" were to be used only on proprietary medicines and other items with proprietary formulas as described in Schedule B of the Tax Act.

The two sets of stamps were not to be used interchangeably. Because of the small odd fractional tax rates charged on proprietary items, use of documentary stamps to pay any of the proprietary taxes would have been highly impractical, and I'm not aware of any extant examples of such usages.

However, it is not uncommon to find proprietary tax stamps used on documents. Such usage was not legal, but generally it was condoned. While mis-use of postage stamps often was disallowed because the money for the stamps went to the Post Office Department instead of the Treasury, the use of proprietary stamps on documents was seldom challenged because the fees paid for them did accrue to the Treasury, albeit to an incorrect account.

Most such incorrect usage of the proprietary stamps occurred in the first few months of the tax period, i.e., July, August, and September, 1898. Confusion about the law and the initial inadequate distribution of the proper stamps both led to misusages.

However, to find a check such as the Teutonia National Bank check illustated below, written in 1901, more than two years into the tax period, bearing propietary stamps is unusual, and it is surprising that it was not questioned.

Teutonia National Bank Check
Dayton, Ohio, February 27, 1901
with two RB24 proprietary stamps
If you carefully look at the closeup detail of the two stamps below, it appears that they may have been reused. Looking closely at the area of the "01" in "1901" and the "00" in "15.00" on the bottom stamp one can discern what appears to be evidence of a prior cancellation. Perhaps the stamps were strategically placed so the amount of the check would help cover that prior cancel. I've viewed thousands of checks and never before have seen one placed in the area where the check amount would serve as a partial cancel. That the stamps feel unusually stiff and there are tell-tale signs of gum stains showing through on the reverse further suggests the probability that they were reused.

The person who wrote the check was an independent insurance agent in Dayton and thus would have had ample access to various denominations of documentary issues. But two-cents in 1898 was not an insignificant amount and one could easily be tempted to reuse a couple of lightly cancelled stamps on a check payable to a singing society. The penalty for reusing stamps though, was stiff; a conviction could have brought a fine of up to one thousand dollars and up to five years hard labor! That's a lot to risk to save two cents. 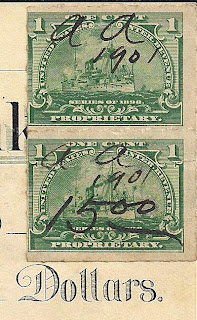 The usage of a single 2-cent proprietary issue on the Arkansas Construction Company check below is much more understandable. It's a July 1, 1898 first day of tax period use and likely it may have been the only stamp available there on that day. Distribution of the tax stamps was uneven all over the country and not all the values were even available for distribution on that day. So even if the bank had wanted to challenge the usage of the proprietary stamp, it may not have had the proper documentary stamps available to do so!

The following Nebraska National Bank Check was submitted by JW Palmer. As he points out it's a bit taddy, but it's also the only example of a challenged proprietary usage on a check I've ever seen. The 2-cent proprietary in the upper left corner was affixed and pen-cancelled by N. R. Sagers on February 2, 1900, the same date as the check. However when O. M. Burrus cashed it on February 7, 1900, Nebraska National required a corrective 2-cent documentary be affixed and it was cancelled by the bank on February 7. Thanks JW, for sharing this nifty item; it 's the perfect piece to cap today's subject.