Its been awhile since I've run a post on 1898 values.  I never purchased the 2011 Scott US Specialized, so I never reviewed price changes, or the lack of them, over the previous year's catalog.  But some interesting chatter in the ether lately has encouraged me to look at other indicators besides the Scott valuation of 1898s.

Of course, here at this site we would never think that we could raise the popularity and demand of 1898s.  We do know that there is at least one big fish in the pond these days, and that always helps with values on the high end.  Seems more folks out there than just one or two know that 1898s are hot.

I don't swim too much with the big fish, preferring the low-brow world of humble cancels.  But I do own some high-rent material, and the contributions of co-bloggers and others have helped display some remarkably desireable material here.
In January I ran a post on Harmer-Schau's upcoming auction that included some very interesting 1898 material.  The original auction, held January 28-30, can be found here.  I highlighted several lots, and said that I would come back to report on the auction results.  Well, I never did.  So we can look at a few lots now and see how they did.  I was always taught delayed gratification was a good thing!

The following four lots were included in the Harmer-Schau sale: 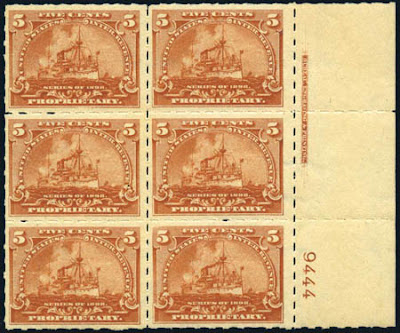 RB31p hyphen hole plate imprint block, estimate of $1200-1400 prior to auction
Realized $1093
It didn't break the estimate, but the block still managed to pull more than a $1000.  Just a few years ago in a Siegel sale, plate imprint blocks of this stamp sold for less than $400.  Somebody is paying attention to these now.  It helps that Scott now lists them. 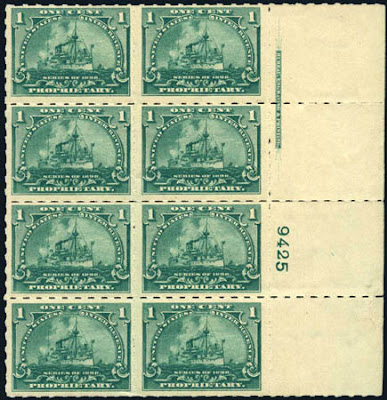 RB24p hyphen hole plate imprint block, estimate of $400-$500 prior to auction
Realized $460
This block fell into the estimate range. 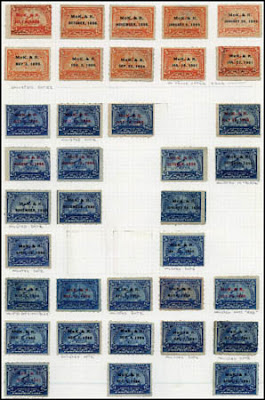 Mckesson & Robbins proprietary printed cancel collection - 181 dates/stamps, estimate $750 to $1000
Realized $575
Way below estimate.  However, while the realization relative to the estimate was low, consider another way to look at these.  During the Siegel sale of Henry Tolman's proprietary printed cancel material, his two volume collection sold as a single lot for approximately $4000.  His McKesson material represented several pages of the collection, yet was a fraction of the overall material.  In relative terms the McKesson collection above sold for terms far above the Tolman stamps.  Same applies to the Emerson stamps below: 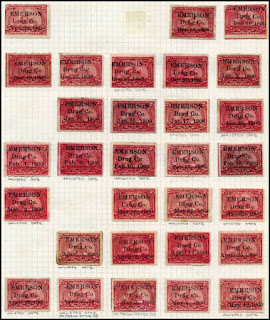 Emerson Drug proprietary printed cancels collection - over 950 dates/stamps - Estimate $1800 to $2000
Realized $1668
Then there is the example of the Ebay lot below, listed by a seller who didn't even identify why the item was so special.  I'm not sure he knew it was extraordinary, and had to be surprised when the item sold for ton.  I originally posted on this lot the day it was sold. 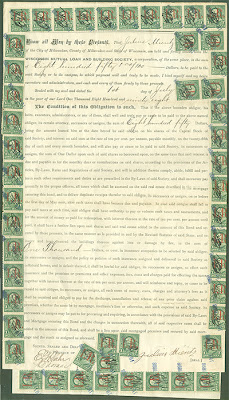 50 copies of R154 on a bond cancelled on the first day of use.
Realized: $787
Here we have a single 1898 document, with nothing but a few one cent revenues framing the page.  $787 later, it had a new owner.  Of course this document is special, but I would guess that it would have sold for no more than $300-500 five years ago.
I don't have the patience to track other 1898 Ebay sales to establish if there is any sort of trend in values.  I will definitely buy the catalog this year, so we'll see where that takes us.  Meanwhile, if you've seen anything interesting to report on this matter, please contact us at 1898revenues@gmail.com.
Posted by John Langlois at 5:00 AM