Big thanks go out to Frank Cunliffe for sending the scans of an article from Chambers Stamp Journal from 1951 on 1898 printed cancels.  The scans are included below.  The article provides some insight into some of the work that was done to organize and account for known railroad printed cancels prior to the publication of Richard Fullerton's list.
Charles Metz wrote a 4 column piece on railroad printed cancels, offering a list of the known types and values and quoting the collector Mr. D. S. Turney and his pursuit of the cancels.  This article provides information unavailable in Richard Fullerton's cancel list, particularly with regard to one of the rarest of the cancels, that made by the Chicago, Fort Madison, & Des Moines Railroad.
I will hand it over to Mr. Metz:
"...Mr. D. S. Turney gives us a very interesting story about an unlisted printed railroad cancel, and for the benefit of Chambers readers we are reproducing it here.
"I have corresponded quite a bit with several of the better known collectors of these issues such as Chappell, Harold Field, Don Lighton, etc., regarding these issues, and have one item which I have never seen listed; nor have any of the above men heard of it.  This is the printed precancel on the 1c blue documentary battleship of the C. F. M. & D. M. R. R. (Chicago, Fort Madison and Des Moines Railroad).  The copy I have is on an original bill of lading of the C. B. & Q. R. R. used in January 1901.  Since this is "right in my own backyard", a little investigation locally, plus the kindness of the C. B. & Q. R. R. in Chicago brought out interesting facts that this was a short line that in its prime extended from Fort Madison, Iowa, northwestward to a junction with the C. B. & Q. R. R. near Batavia, Iowa (12 miles west of my home). 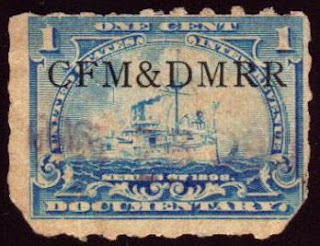 Richard Friedberg scan
"The short line was originally 3-foot gauge, what was standardized about 1890, and on January 1, 1900 the entire road, 71 miles long, was leased to the C. B. & Q..  Exactly a year later, the C. B. & Q. bought complete ownership of the road thru purchase of its securities, and its identity as the C. F. M. & D. M. ceased to exist.  My conclusion is that the C. B. & Q., which was fairly prolific in its use of printed precancels on the 1c blue on its leased and subsidiary lines, also caused precancels to be made for the short line after it assumed the lease in January 1900.  Probably these precancels were used during 1900 and the remainders used in 1901 after the C. B. & Q. became owner of the road.
"The cancel is set up in block caps with serifs, all in one line and in black.  I became interested in these precancels, especially the R. R. issues, thru the acquisition of a large quantity of the bills of lading of the period 1898 to 1902, which were mostly from the midwestern railroads.  Among them were numerous copies of the C. B. & Q. and subsidiary lines, Chicago & Northwestern; Mo. Pacific; St. L. I. M. & So.; St. L. & S. W., and others.  It has made a fine collection, all being on the original instruments. 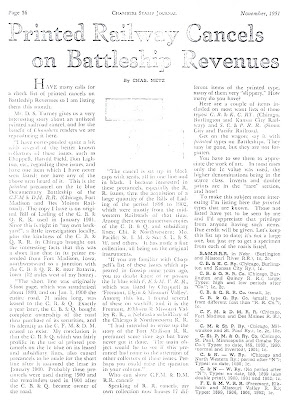 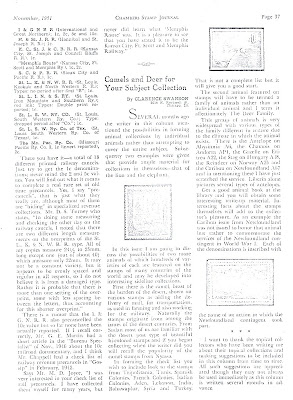