On May 14, I posted an article in Chambers Stamp Journal written by Charles Metz in 1951 about his efforts to list documentary railroad printed cancels.  It is apparent that Mr. Metz had been working to establish a comprehensive list, likely independent of Mr. Fullerton, and before the publication of Mr. Fullerton's list.  And it is also apparent that Mr. Metz' work is derivative and from the work of Clarence Chappell, and that somewhere along the way the collection of Harold Field meant much to the study of these cancels.  Yikes.  I'm not sure if anybody can claim original ownership of this work, even if there exists this list by Mr. Fullerton.

In the late 1940s, The American Revenuer republished several of Mr. Metz's pieces from the Chambers Stamp journal.  The list below, from the cover of the September, 1948 edition of TAR, appears derived from the work of Clarence Chappell: 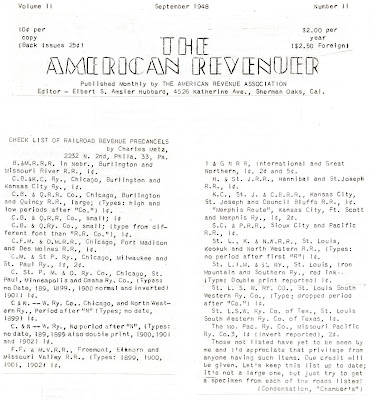 The short letter below was included in the November, 1948 edition of The American Revenuer, which was also borrowed from the Chambers Stamp Journal:

Extra thanks to Frank Cunliffe for sending these morsels.
Posted by John Langlois at 8:00 AM