Consideration of R181, the $1,000 James Madison Portrait Issue leads to another Choctaw, Oklahoma and Gulf Railroad stock. We considered two other CO&GRR stocks in our last blog about the $500 Portrait Issue.

I'm not sure why the upper right corner is clipped on all three certificates. They all are clearly marked CANCELLED with a bright red handstamp, so what purpose was served by clipping the upper right corner? The clipping obviously occurred after their initial issuance as the $500 stamp on one of the stocks shown previously was affected by it. We may never know the answer, so let's just enjoy seeing one of two currently known on-document usages of the $1000 Portrait Issue of 1899. 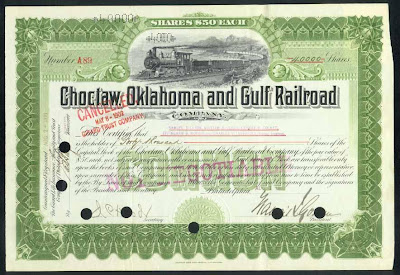 Like one of the other CO&GRR certificates previously shown, Samuel Dickson, William Jenks, George Colket, Effingham Morris, and Charles Ingersoll, Voting Trustees are listed as the owners. The initial issue tax of .05/$100 in value or fraction thereof was properly paid on the reverse with a single $1000 James Madison stamp. 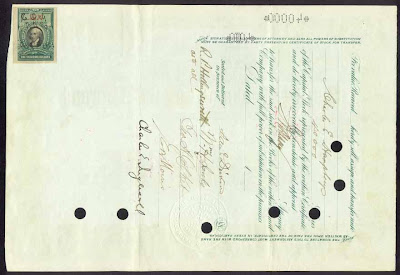 The $1,000 stamp paying the initial tax appears on the reverse. The power of attorney form transferring the stock to Charles E. Hampheys, also the recipient of the other two CO&GRR stocks previously considered, has been completed and signed. It is undated so if that transfer actually occurred, payment of the $400 transfer tax and the 25-cent power of attorney tax could have been done, albeit improperly on the books of the company or by separate memorandum no longer with the certificate. 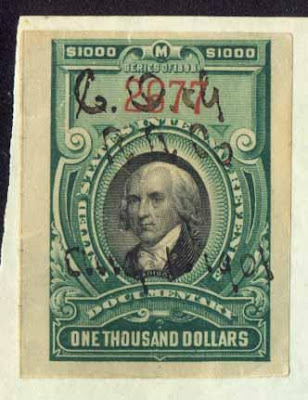 We've viewed three CO&GRR stocks in our series of blogs about high value stocks bearing Portrait issues. All three exhibit clear and proper payment of the .05 cent/$100 tax on initial stock issues. But payment of the .02/$100 resale or transfer tax has been handled differently on all three.

For the $2,000,000 stock above, although the transfer form has been completed and signed there is no evidence of payment of either the power of attorney tax or the transfer tax.

For the $1,027,500 stock shown in our April 29th blog the $205.50 transfer tax was paid directly on the certificate, but there is no evidence of payment for the power of attorney tax.

That evidence of those taxes don't appear on the certificates doesn't mean they weren't paid, although that is a distinct possibility. The War Law provided that transfer taxes could be paid on the books of the company, but that option was to be restricted to cases where the transfer was evidenced only on the books and not on the certificate transfer form as in the case of these three stocks. The other way transfer taxes could be paid was by separate memorandum, appropriate only for sales of stock where the transfer form was "assigned in blank" again not the case with these three stocks.

The inconsistencies aside, it's been fun to blog about these high value stocks and to see them all in one place. I'm sure sure there's an interesting tale behind the CO&GRR stocks. And just who was Charles Hamphreys, the transferee on all three?Perhaps if more high values examples surface the story will be revealed.

We are conducting a census of on-document usages for all three Portrait Issues, Scott numbers R179, R180, and R181 so if readers either have, or know of, other on-document examples of these $100, $500, and $1000 issues,whether they be on stocks or other documents, please contact us at 1898revenues@gmail.com.
Posted by Frank Sente at 12:00 PM