Continuing with a look at imprinted checks that have had an adhesive revenue added, I can only offer two examples that would bear out the idea that a third-party endorsement created a taxable event.

The first is a Merchant's National Bank draft on the Fourth National Bank of New York. Written October 25, 1898, it bears an adhesive revenue dated October 29. The rest of the cancel appears to be "Happy MED Co." It is not a bank cancel, at any rate. 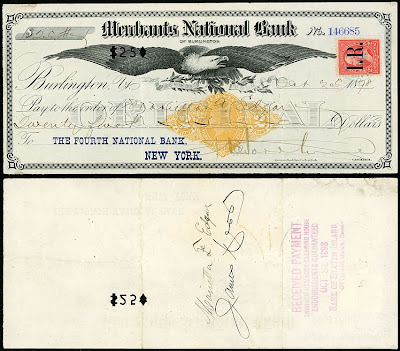 The payee, Marietta F. Edgar, endorsed the check over to James somebody, and the Bank of Staten Island guaranteed the endorsements. This is reminiscent of the circumstances surrounding the Cowles check in the previous post on this subject.
Second, we have a check written to the order of C.R. Spaulding on May 7, 1900. It was endorsed by Spaulding and Geo. J Grear in what appears to be the same hand or at least using the same pen. The next endorsement is by Sister Bernardine of the Sisters of Notre Dame, who added a battleship revenue and canceled it with the initials S.N.D. There is no guarantee of endorsements involved. 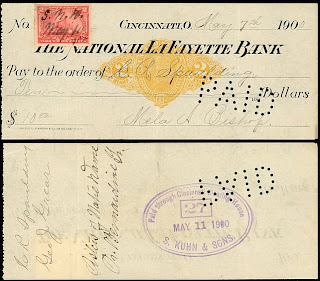 If it is truly a four-party check, why is there only one additional stamp?
For each of these checks with an added revenue ostensibly for third-party involvement, there are dozens in my collection that do involve a third or fourth party, but do not appear to have paid any tax as a result.
For instance, the draft below was written on the First National Bank of Oxford, New York, payable by the Central National Bank of New York City. The payee, Peter V. Newkirk, endorsed it back to the writer, Jared C. Estelow, who then endorsed it for payment. The endorsements were guaranteed by the Erie County Savings Bank of Buffalo. No additional tax was paid. 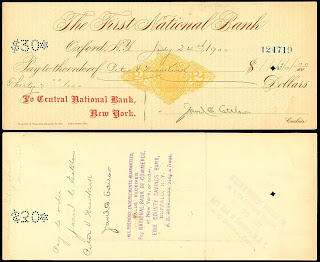 Interestingly enough, there is a faint pencil notation "for deposit Elizabeth Newkirk" at the far left. Apparently Peter Newkirk changed his mind and no attention was paid to that endorsement.
The next check was written by William Potter to Mary L Potter, who endorsed it over to H.V. Allen, who endorsed it over to someone whose name was something like B.F. Thomas. All endorsements were guaranteed by the Boylston National Bank. No additional tax was paid on this four-party check. 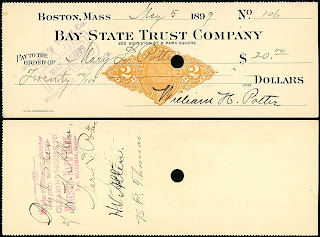 Another four-party check is this one written to F.E. Patton, who used a "Pay to the order of" endorsement to W.F. Higgins, who, in turn, endorsed it to John McCann. When the National Bank of the Republic received it they guaranteed all previous endorsements. There is no evidence of an additional stamp. 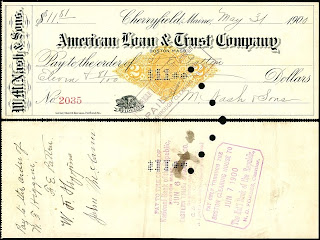 These are just a few examples of the third and fourth-party checks in my collection that do not have additional stamps. I think there are enough to conclude that endorsement to another person or financial institution did not create a taxable event, or, if it did, almost no one paid the tax.
To end this installment of the saga, let's take a look at four checks written by the Cincinnati, Portsmouth & Virginia railroad Company on August 25, 1898.
The first, paying T.C. Kennedy for damage to a meadow caused by fire set by a train, has only an adhesive revenue. It was endorsed by Kennedy and A.S. Godfrey, a third party. 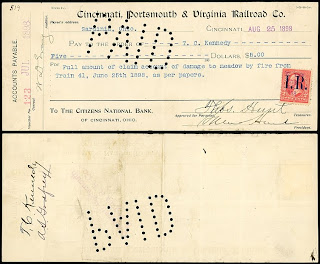 The second has only an imprinted revenue. It paid for a lamb killed (and two injured) by a train. The payee, John Erthel, endorsed it, but it was a third party, J.B. Hopkins, who signed it over to the Citizens National Bank. 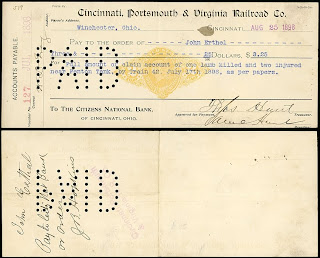 The third, paying the Queen City Supply Company for various supplies, does bear an adhesive revenue, but there is no indication that Queen City did anything but cash it at the Market National Bank. The handwriting on the added stamp is virtually indecipherable, but it appears to have been added on August 30, the same date as it was paid through the Cincinnati Clearing House. Who added it and why are good questions. This use is early in the tax period, so perhaps someone did not understand, or did not recognize the imprint as having paid the tax. 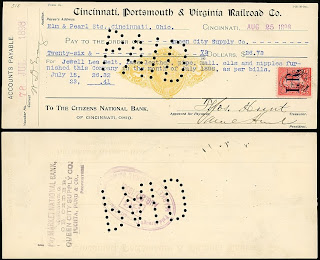 The fourth was paid to C.L. Bowman, Agent, for coal. Bowman endorsed it over to the Walnut Hills Coal Company. The extra stamp on the check was added on the day of issue and bears the initials T.H., so was likely put there by Thomas Hunt, the Treasurer of the railroad. As we will discuss in the next installment, we have some evidence that directing checks or drafts to an agent or commission merchant triggered a second round of taxation - but why would this have been paid by the issuer rather than by the agent? Also, the cancellation on the stamp on the meadow fire check is a handstamp, so why wouldn't Hunt have used it to cancel the stamp on this check? 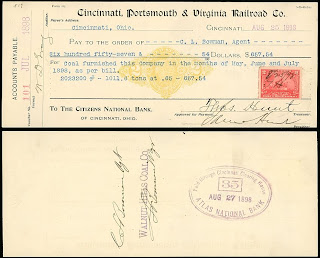 There are more questions than answers here, I'm afraid.
To be continued.
Posted by Bob H. at 7:31 PM