One of the joys of blogging about the taxed documents of the Spanish American War era has been corresponding and trading notes with other collectors. In the course of blogging about bills of exchange, Bob Patetta and I discovered we both possessed bills of exchange that had been taxed in three countries: The United States, Great Britain, and Switzerland. As "philatelic hat tricks" so-to-speak, they hold prized status in our respective collections.
Bob's is in the form of a Customer's Bank Draft; mine was written as a Sight Draft. Initially I thought it would be fun to include both in the same blog, but decided instead they deserved separate attention. Here's Bob's example.
To accomodate all the transit endorsements plus an explanatory note, a piece was added, (at right on front view), so the document is elongated to the degree that it's hard to show in its entirety. I've done so, for the record, in the first two illustrations below, and will discuss the draft from the next set of four detail scans.

Detail view of Ritz Draft
Showing US and GB Revenues
Patetta scan
The draft was written by John Ritz, Wallace, Idaho to Fredrik Ritz, Buren an der Aare, Canton Bern, Switzerland. As best I can determine, 5,260 Swiss Francs equated to slightly more than US$1,000. At 4-cents per $100 in value or fraction thereof, the proper tax rate for singly written bills of exchange, the US tax was 44 cents (11 x $.04), so Ritz overpaid the tax by 1-cent. The US stamps are pencancelled "J R" with a further date stamp of "AUG 3 1898" added by the Wallace Bank. Also note what appears to be an internal bank tracking number, 9909, within the the oval cancel at upper right:
The First Bank of Wallace
No. 9909
Wallace, Idaho.
As the endorsements on the reverse will show, the draft passed through the Hanover National Bank in New York to the Union Bank of London which taxed the draft One Penny atop the US stamps. Cancelled:
UNION BANK OF LONDON
19 AUG 1898
LIMITED 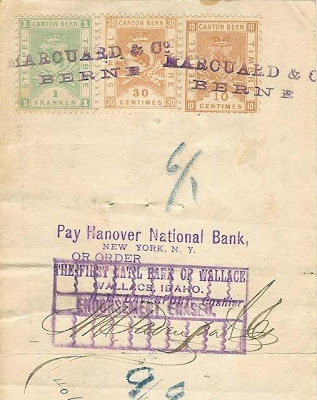 Detail of Top Portion of Reverse of Ritz Draft
Showing Swiss Revenues and Two Endorsements
Patetta scan
Incredibly the draft apparently reached Bern the next day, August 20, the date of the Marcuard & Co. cancel shown below. Marcuard & Co. added the Bern Canton revenues, shown above, totaling 41 centimes. We'd appreciate receiving comment at 1898revenues@gmail.com from anyone able to explain the Swiss tax rates.
If you look closely at the Pay Hanover National Bank Or Order endorsement of the First Natl Bank of Wallace, you'll note it has been overprinted with a three-tiered boxed ENDORSEMENT ERASED cancellation with wavy lines in the top and bottom tiers. Again, we'd appreciate comment from anyone who could explain which party may have added that cancel and why. 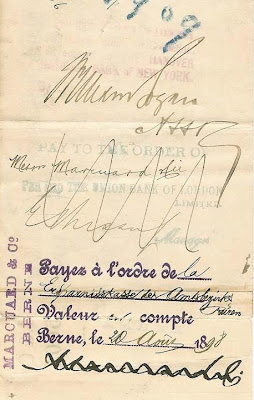 Detail of Middle Portion of Ritz Draft
Showing Three Endorsements
Patetta Scan
The above middle portion of the draft shows the tranmittal endorsement from the Union Bank of London to Marcuard & Co. in Bern as well as Marcaurd's subsequent endorsement to an unknown entity in Buren:
Payez a l' ordre de la
???????? der ???????? Buren
Valeur en compte
Berne, le 20 Aout 1898
The final endorsement is important as that's the party that ultimately would have communicated with Fredrik Ritz. Again, we seek comment about that unknown party. 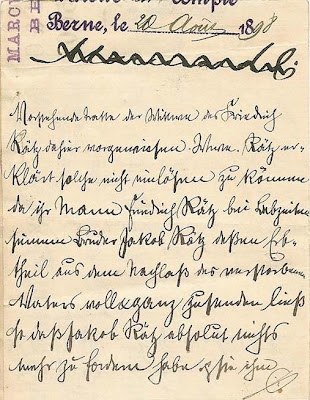 Detail of Bottom of Ritz Draft
Showing an Explanatory Note
Patetta Scan
Finally, we'd appreciate hearing from anyone who could translate the text of the note written at the bottom of the draft.
Despite the questions raised it is a wonderful piece demonstrating taxation in three political realms and our thanks go to Bob Patteta for providing the scans.