John's recent post with a Saint Louis, Iron Mountain and Southern cancel on a one-cent battleship triggered this one.


One-cent battleship revenues weren't really made for use on checks - that's why the two-cent ones were printed, after all. Finding pairs of those with printed cancels used to pay the check tax is a bit unusual. I've only run into three so far.
The first example is the use of two one-cent battleships with Saint Louis, Iron Mountain and Southern printed cancels used to pay the check tax in Little Rock. I wasn't able to get information on J.R. Miller tying him to the railroad, but someone of that name was on the Board of Directors of the Little Rock, Hot Springs and Texas Railroad Company and could have had access to the overprinted stamps. One Mrs. J.R. Miller died in her seventies in June of 1916. 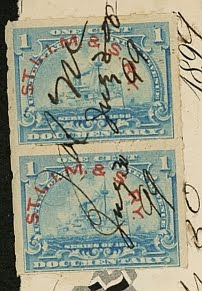 The second example is also from Arkansas. P.H. (?) Hammond of the P.M. Company used a pair of battleships with Saint Louis Southwestern cancels to pay the tax. If anyone can guess what the P.M. Company was and how Hammond got hold of the stamps for his personal use, I'd be interested.

My last example is of a pair of one-cent battleships with printed American Express cancels being used to pay the check tax. S.J. Hopper was a Sturgis railroad agent in the correct time period, which would explain how he obtained the stamps. 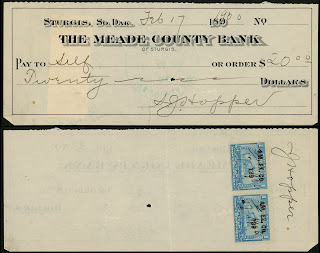 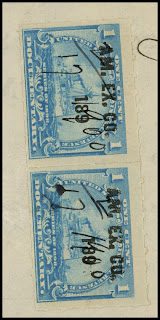 Companies did put printed cancels on two-cent battleships for use on checks. The battleship on the check below has a Mo Pac cancel, and was properly used by the railway. 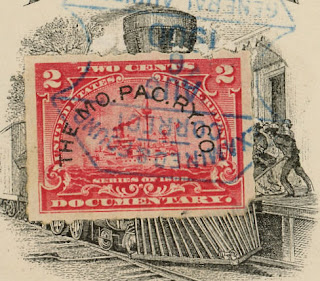 Another proper use is shown on the Burlington & Missouri River Railroad railroad draft below. The auditor of the B.&M.R.R.R. was requesting payment of car service fees from the Chicago & West Michigan Railway, which became part of the Pere Marquette on January 1, 1900. 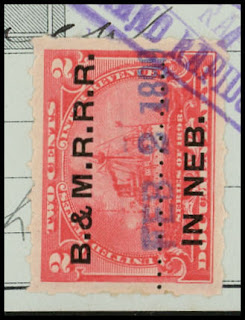