The Peruna, or Pe-ru-na, Drug Manufacturing Company was big business at the turn of the twentieth century. The illustrated $259.00 draft called for payment on three days' sight, so was properly taxed at six cents - two cents for each hundred dollars or fraction thereof.

Peruna was located in Columbus and the Stein Vogeler Drug Company was located in Cleveland, but the Western German Bank apparently received the draft on the day it was written, February 23rd, and sent it by runner to Stein Vogeler, where it was accepted the same day and paid into the Peruna account at the bank promptly.
Many merchant's drafts did not allow extra time for the paying company to process them, expecting it to be done "on sight." By giving three days Peruna may have been exercising good business practices but it cost them four cents more in taxes to do so. 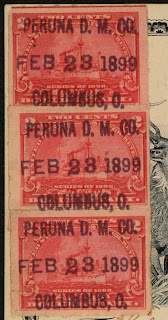 And what was Pe-ru-na? From Collier's Weekly, October 28, 1905: "Peruna, or, as its owner, Dr. S. B. Hartman, of Columbus, Ohio (once a physician in good standing), prefers to write it, Pe-ru-na, is at present the most prominent proprietary nostrum in the country." The following material is from the same source, liberally abridged:
"What does Peruna cure? Catarrh. That is the modest claim for it; nothing but catarrh. To be sure, a careful study of its literature will suggest its value as a tonic and a preventive of lassitude. But its reputation rests on catarrh. What is catarrh? Whatever ails you. No matter what you've got, you will be. not only enabled. but compelled, after reading Dr. Hartman's Peruna book 'The Ills of Life,' to diagnose your illness – as catarrh and to realize that Peruna alone will save you. Pneumomia is catarrh of the lungs; so is consumption. Dyspepsia is catarrh of the stomach. Enteritis is catarrh of the intestines. ... Bright's, disease is catarrh of the kidneys. Heart disease is catarrh of the heart. Canker sores are catarrh of the mouth. Measles is, perhaps. catarrh of the skin, since "a teaspoonful of Peruna thrice daily or oftener is In effectual Cure." ... Similarly, malaria, one may guess, is catarrh of the mosquito that bit you.
"Peruna is not a cure-all," virtuously disclaims Dr. Hartman, and grasps at a golden opportunity by advertising his nostrum as a preventive against yellow fever! That alcohol and water, with a little coloring matter and one-half of 1 per cent. of mild drugs, will cure all or any of the ills listed above is too ridiculous to need refutation. Nor does Dr. Hartman himself personally make that claim for his product. He stated to me specifically. and repeatedly that no drug or combination of drugs, with the possible exception of quinine for malaria, will cure disease. His claim is that the belief of the patient in Peruna, fostered as it is by the printed testimony, and aided by 'gentle stimulation,' produces good results.
"Any one wishing to make Peruna for home consumption may do so by mixing half a pint of cologne spirits, 190 proof, with a pint and a half of water, adding thereto a little cubeb for flavor and a little burned sugar for color." The article goes on to cite some lurid stories involving alcohol poisoning.
The Pure Food and Drug Act was not passed until 1906.
Posted by Bob H. at 12:01 AM