Several days ago Frank Sente and I bid on the same lot on eBay - a parlor car ticket with a battleship revenue paying the required tax. I came out the winner by a few dollars, and Frank expressed the hope that I would blog on it some day. I will when I receive it.
This reminded me that I do have a pair of Cleveland, Cincinnati, Chicago & Saint Louis Railway parlor or chair car checks, each with a one-cent battleship on the back. These appeared on eBay around nine years ago, when I was putting together my very first exhibit (imprinted parlor car tickets), and I badly wanted them for the first page to show how companies that didn't use imprints paid the tax. I set a high snipe, and got up in the middle of the night to go see if I had won them. Indeed, I had. 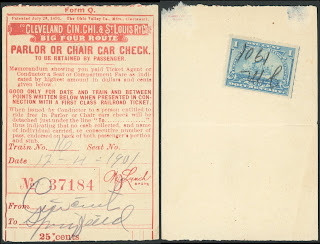 Interestingly enough, the tickets were used in December of 1901, after many of the Spanish American War taxes had been repealed.

The CCC & StL Railway operated from June of 1889 until it was folded into the New York Central in 1930. 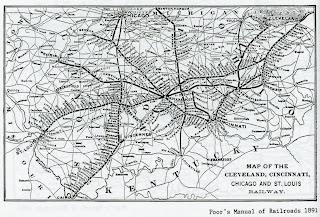