2010 is over and its time to see how we play out there in cyberspace.  Nobody would ever call this highly specialized website viral.  However, despite relatively low numbers that visit 1898 Revenues, the year has shown steady upward progress in the number of people that visit the site.  I was playing with numbers for our web traffic, and produced the chart below: 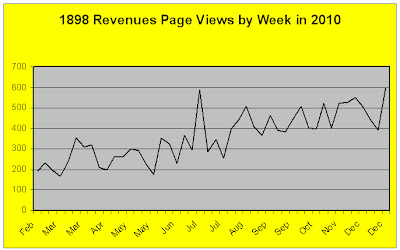 I've plotted the number of page views by week over the course of the year, omitting January for which I have no data (bad planning on my part).  From a simple visual analysis, I see three phases in page view rates on this chart.
I am a trained statistician, but I don't have it in me to dust off those skills to analyze this limited data set.  However, there are some events that can be plotted against the data that might help explain some of the changes over time:
******
With the growing number of page views, there should be changes in the ranking the site receives from Google when conducting specific searches:
1898 series revenue stamps   Google #1
battleship revenues:  Google #2
2 cent documentary   Google #1  (Google #13 in March 2010)
US revenue stamps  Google #17  (Google #76 in March 2010)
revenue cancels   Google #12  (Google #28 in March 2010)
Some improvement here, partially explained by longevity of the site as well as growing numbers of visitors.
*******
2011 should be an interesting year for the site.  Given work and family obligations I can't be too sure how soon major projects can be completed, like producing a revised catalog of documentary printed cancels.  But with the launch of a major project and the addition of a few more specialists interested in the site, numbers of page views should continue to grow.  Frank and Bob have added real experience and expertise to the site, and I am certain that the legitimacy they add to the site is a significant source of draw.  What is more, the steady addition of their thoughts and material to this public forum steadily increases the site's status as a source of searchable philatelic information.  Thanks again to them for their help, and for the steady contribution of material and moral support from Dave Thompson.  Happy New Year to all!!
Posted by John Langlois at 1:00 AM