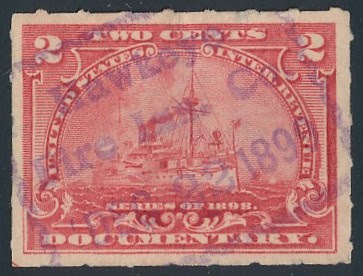 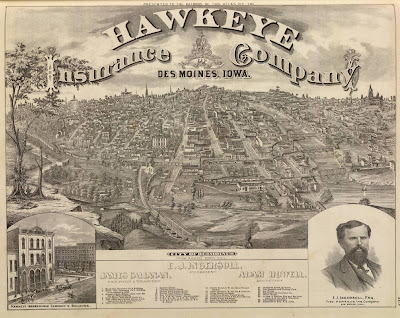 E. J. INGERSOLL:  Of the many old settlers of Polk County who impressed themselves upon the community, few were more conspicuous than Ebenezer Jared Ingersoll.

Born in Pulaski, Oswego County, New York, March Twenty-eighth, 1828, of English ancestry, which embraced the names of men eminent as ministers, lawyers, and statesmen. He lived with his parents until twenty-one years old, and acquired a thorough academic education. After reading law in the office of Judge Huntington, of Pulaski, he entered the United States Law School at Balston Springs, and was graduated in 1852, with the degree of Bachelor of Law, and was admitted to practice in the state and federal courts. He opened an office in Adams, Greene County, New York, where he secured a large and profitable practice.

In the fall of 1858, he joined the tide of emigration westward and came to Des Moines, where he was admitted to the Bar and at once took high rank with the members of the profession. A man of optimistic temperament, remarkable force and energy, he soon discovered greater possibilities for the Capital City, and became a booster and promoter of business enterprises, not only in the town, but throughout Central Iowa. He demonstrated his faith in their growth and prosperity by engaging in several business enterprises. He also purchased several farms and engaged extensively in raising thoroughbred stock.

One day, in 1860, Ingersoll, S. R. Ingham, J. M. Elwood, and John Browne were sitting in a social game of whist in the old Exchange Building, at Third and Walnut. Browne had been the Western agent of the Globe Insurance Company, of Utica, New York. During the play, insurance was discussed, quite naturally, as the Globe Company had just collapsed, and Browne said to his friends: "Why don't you start an insurance company?" Ingersoll at once began to consider it, but the Civil War came on, during which there was little inducement to undertake enterprises of that kind. He, however, with his usual pertinacity, stuck to it, and March Sixth, 1865, with B. F. Allen, Frank W. Palmer, James Callahan, and J. B. Tiffin, organized the Hawkeye Fire Insurance Company. For three years, the company did business as a partnership. Ingersoll was elected President, and held the office until his death, in 1891. He was the pioneer in a business system which has expanded until Des Moines is now known as the "Hartford of the West."

April Seventh, 1868, the company was incorporated under the laws of Iowa, the following persons signing the Articles of Incorporation: F. W. Palmer, J. B. Tiffin, B. F. Allen, James Callanan, Junior, W. S. Pritchard, and E. J. lngersoll. Mr. Callanan was elected Treasurer, and held the place several years. The capital stock was fixed at one hundred thousand dollars.

In 1870, Mr. Ingersoll abandoned his other enterprises, and devoted his time and energy to build up the Hawkeye. It was uphill work. The older Eastern companies, represented by agents, interposed every possible obstacle to his progress, but they reckoned without their host when they struck Ingersoll, for he was a man of indomitable will and courage, denoted in every line of his face, which, like an electric current, became stronger as resistance against it increased. Opposition only intensified his force. The Hawkeye was his creation. He was the moving spirit of it, making it one of the strongest financial institutions of the state, but he had to fight for it, step by step.

As a business man, he was eminently successful. He was a person of athletic build, nervous, lymphatic temperament, brusque and plain of speech, often using very vigorous swear-words; was no hero-worshipper; was strong in his convictions, which, once fixed, were not easily removed. I remember an incident which occurred soon after the Legislature had made a change in the insurance laws, tending to protect the public against the watering of stock, and among other requirements was one that joint stock companies must have the words, "Stock Company," prominently printed on the face of their policies. His supply of blank policies having become exhausted, he ordered several thousand printed by Mills & Company, and one day when they were running through the press I called his attention to the omission of the words, "Stock Company," which the statute required put in, supposing that it was an error which sometimes occurs in the best-regulated printing offices, and that he would order the presses stopped to make the correction, but, instead, he retorted: "I don't care a d — n what the d— n fools over at the State House require. I'll have my policies printed the way I want them." The job was finished, but a few days after, he ordered another lot printed, with the required words in place, but he never changed his opinion resisting the Legislature.

Politically, he was a Democrat, of the ultra variety, but abjured politics entirely. He was not built for a politician, and would have failed had he attempted to play the game.

Socially, he was a person of high ideals. Brusque and blunt as he was, his heart pulsated with tenderness and sympathy for those in want or suffering, and his purse was always open to such for relief. He was not a good mixer, but his friends were those who knew him as he was, a man of probity, honesty of purpose; and they never faltered in their attachments. He was not a member of any clubs or fraternal organizations.