Most checks payable on sight or demand were taxed from October 1, 1862 until July 1, 1883, then again from July 1, 1898 to July 1, 1901. From late 1875 until the end of the Civil War tax period the only imprint design used was diamond-shaped and printed in orange. A last day use of that design is shown below.

Several companies immediately offered banks facsimile designs that could be printed on checks and drafts, presumably to avoid a feeling of something missing on the part of the general public. A. Gast & Company, of Saint Louis and New York, was one of these. The draft below was one of a set sent out to various banks on July 1, 1883. It features a state seal inside a diamond about the same size of the revenue imprints recently used.

Some accounts used these facsimiles until the 1920's. Invariably, some were used in the Spanish-American war tax period. The handsome draft below, used September 12, 1898, has a Texas state seal in the facsimile, or FAC, and a two-cent provisional tax stamp. It was used by the receivers of the J.B. Watkins Company, which was founded in Lawrence, Kansas.
A Watkins family website provides the following information: "J. B. Watkins was born in Pennsylvania in 1845, law graduate of the University of Michigan, moved to Lawrence in 1873 to start a real estate title and loan business which he later incorporated as the J. B. Watkins Land Mortgage Company. He raised money in the eastern states and in England which he invested in large tracts of land. He also organized a bank to handle his many financial transactions."

Some FACs were more on the order of logos for a particular company. This one was designed specifically for Carter, Rice, who ran a paper company in Boston. When their check was used in July of 1898 a provisional revenue stamp was added.

Several companies had an imprinted revenue added to a check with a facsimile imprint instead of using an adhesive revenue. On most of them the new imprint was added to the lower left to avoid conflict with the FAC.

The user of the check below should have told the imprint printer to do something, since they apparently were not inclined to take it upon themselves to avoid the mess that occurred when they printed it on top of the FAC already on the check. The FAC imprint is shown below it. 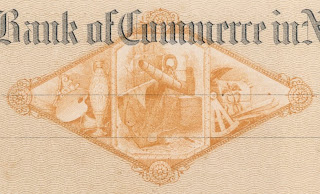