This Bankers Life Association policy was issued for $2,000 on the life of Peter A. Hinners of Beardstown, Illinois in December of 1900. The tax on life insurance policies at that time was eight cents per hundred dollars or fraction thereof of indemnity, and in this case was paid using two eighty-cent battleship revenues. 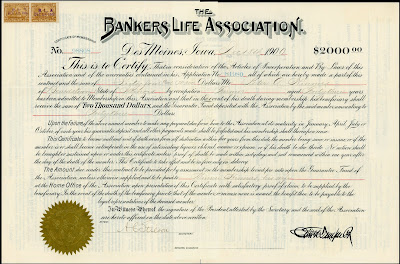 The policy included membership in the Association, involving a $43 deposit, payable in four equal installments at 4% interest. The promissory note in the policy was not taxed as such, or at least, no tax was paid on it. Perhaps if anyone had called the IRS's attention to it, the result would have been different.
The Bankers Life Association was founded July 1, 1879 and became a mutual company in 1909. In 1985 it changed its name to Principal Financial Group and it currently is one of the Fortune 500 companies.
Posted by Bob H. at 12:01 AM