A few years ago a small stack of accounts payable checks from the Cincinnati, Portsmouth & Virginia Railroad Company appeared at a paper money show. They were particularly interesting in that the goods or services that occasioned each check were spelled out in some detail. For instance, the check below was written on August 1, 1898 for fifty dollars, paying for "Postage and Int. Revenue Stamps for use in General Offices."

The next check is even more interesting, written on August 10, 1898 to the Strobridge Lithographing Company for "Imprinting Revenue Stamps on PayRoll checks #7160 to 8500, Vouchers 500 blanks." It is rare that we know which of the initial 28 companies printed the revenues on any given document. Strobridge was located in Cincinnati, so it was a logical, but not necessary, choice. Unfortunately, I do not have one of their imprinted paychecks. If any reader does, I'd like to see one.

One more, written October 27, 1898, paying $13.00 for "Amount of claim account of loss of two cases of sausage. account of delay caused by burning of West Fork Bridge in October 1897, as per papers."

All of these checks were signed by Thomas Hunt, Treasurer, and Samuel Hunt, President. Samuel was also President of the Ohio River and Charleston Railway. Both of his companies are pictured in the 1901 map below. 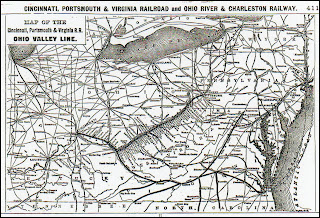 Samuel Hunt went on to become President of the Detroit Southern, which went into receivership by 1904 and was absorbed into the Detroit, Toledo & Ironton in 1905. Hunt was President of that company briefly, dying later that year.
Posted by Bob H. at 8:00 PM